The US War Had Been Good for President Vladimir Putin, and the Russian Economy Looks Stable Through the Presidential Election. So If You Are a US Warfighter, What Is the Regime Change Opportunity Now? 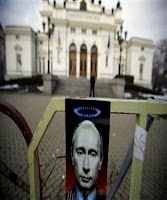 Moscow - The Russian economic recovery went sharply into reverse in February, according to the latest report from Rosstat, the federal state statistics service. But voter approval for President Vladimir Putin remains super-stable at a level unknown in Europe or the rest the world.

So if you are bent on fighting Russia, as the generals now in charge of US policy in Washington say and do, what opportunity is there for toppling Putin before the presidential election due in March 2018? One veteran of high-level Russian policy in Europe predicts:

“The trouble for Putin will come when the World Cup starts in June of next year. But that’s after he is elected in March. No-one realizes, not yet, how much trouble the football competition will cause, with thousands of visa-free foreign agitators in the country calling themselves fans, and half a billion people watching on TV.”


An analysis just released by Uralsib Bank analyst, Alexei Devyatov, of the latest economic results shows that for most Russians real income growth has not only stalled — the indicator has started to fall again from positive 8.1% in January to minus 4.1% in February.


THE SITUATION IN THE ECONOMY HAS WORSENED IN FEBRUARY
Growth rates of key indicators, percent change compared to the same period of 2016 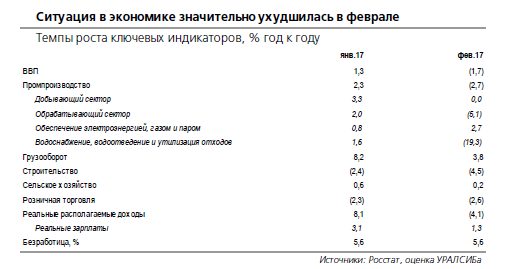 
The current income data for January and February, writes Devyatov, show that January’s growth was driven by the Finance Ministry’s large lump-sum payment of pensions. Gross Domestic Product (GDP) was boosted by 1.3%, compared to January 2016, by this payment. The statistic helped reinforce most Moscow analyst forecasts for GDP growth this year of between 1% and 2%.

The last staff report on the Russian economy from the International Monetary Fund (IMF) summarized the bad news since 2014, and also the modestly good news predicted for this year.


A month ago Russian analysts were reporting to clients that they are anticipating this year’s recovery rate will accelerate faster than the IMF’s 1% forecast.


The Gaidar Institute of St. Petersburg, which is generally hostile to Putin, is reporting “the early phase of a cyclical upturn in the economy from the bottom point of the business cycle”. Before the February statistics were out, the institute was predicting GDP growth this year of 1.4%, accelerating next year to between 1.7% to 2.2%.

Devyatov (pictured below left) warns: “it is necessary to recognize that the economy still cannot reach a trajectory of sustainable development. We confirm our forecast of growth of real GDP at the level of 1.9% in 2017, but we see the risk that actual growth in the current year will turn out to be slightly less.” Natalia Orlova (above right), Alfa Bank’s chief economist, is pessimistic, but for the period after the presidential election, not before. “The main risk for real income is the state budget policy. Before sanctions in 2014 the salaries of employees of state-owned organizations had been raised regularly. But after 2014 they were frozen. In 2018 there will be the election of the president in Russia and if the government raises the salaries of state employees, the companies will have to do it too, in order to compete for employees with the state as the unemployment level is low now. That will have a positive effect for people in the short run, but after that it will cause inflation to increase.”


Russian wage-earners are apprehensive. The most sensitive indicator of their expectations of growth, or worse, is the monthly release of the wage arrears statistic. This measures the salary amounts owed to workers but unpaid by the state, and by private or commercial employers.

Wage arrears were invented in the 1990s by the Yeltsin administration as a confiscatory tax. The wage arrears trend indicates loss of confidence on the part of domestic investors, who have stopped paying their employees, as well as their suppliers and the tax authorities. A rising wage arrears figure triggers apprehension throughout the electorate. Two years ago, 96.6% of the wage arrears were owed by private, commercial and non-government enterprises. Though government at the federal, regional and municipal or local levels generally pays on time, here is how to calculate that a 1% increase in wage arrears owed by business turns into a 0.5% decline in the approval ratings of the president and prime minister. 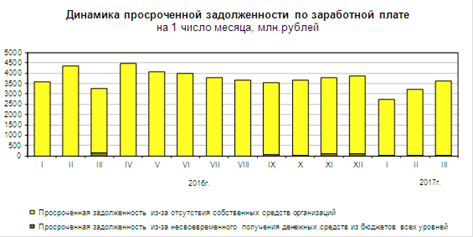 A year later, in March 2016, wage arrears were heading above the Rb4 billion level; the story looked like this.

Consider what the latest wage arrears chart shows for January 1, February 1, and March 1 of this year. The sharp decline in January below the Rb3 billion mark pulled the indicator back to where it was at the start of 2015. The government proportion of the arrears total is now even smaller than earlier measurements; 99.6% of the arrears aggregate is now owed by the private sector. Since January, however, the total figure has been rising back up again. In comparative terms, the arrears indicator for January turns out to be no harbinger of accelerating economic recovery – more a flash in the pan.

Public approval of Putin’s performance as president went up in January, but not by as much as the November score of 86%. A year ago, the Levada Centre in Moscow measured public approval and disapproval of Putin at 82% positive, 17% negative. The current measures are 84% positive, 15% negative. This means public disapproval has been shrinking as wartime conditions get worse, while approval is stable within the margin for statistical error.


IN GENERAL DO YOU APPROVE OR DISAPPROVE OF VLADIMIR PUTIN’S PERFORMANCE AS PRESIDENT?


The line chart (below) illustrates how Putin’s ratings have been moving since February 2014, when the US started the war in Ukraine. It is clear the approval line has stabilized above 80% and disapproval below 20%. 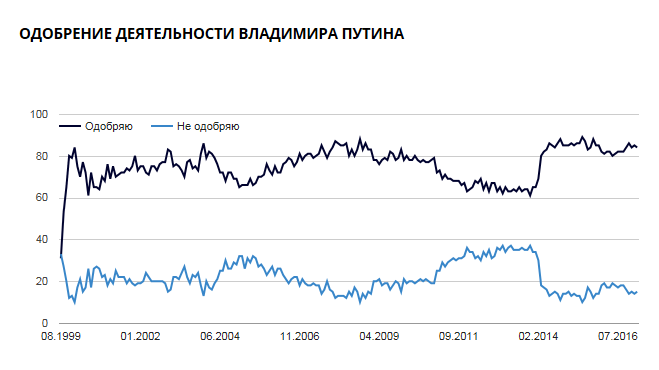 Putin’s achievement cannot be exaggerated — no political leader of a major country in the world is recording such durably high approval ratings. But the achievement is qualified. Without the US war in Ukraine, then US and European Union (EU) sanctions, the approval line for Putin would have continued downwards as the collapse of the oil price and the rouble tipped the economy into recession, and as Russian voters lost trust in their future.


The Credit Suisse consumer confidence report for 2017 illustrates what has happened: 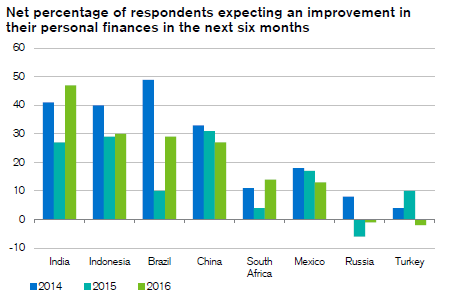 
In 2014, before war, oil price collapse, devaluation and US-EU sanctions were felt in earnest, Russian consumers were optimistic, though not quite as much so as their emerging market (EM) peers. The subsequent impact in 2015 was more negative than for the other EM countries; although the impact softened in 2016, it remains negative.


From the domestic point of view, Credit Suisse’s chart of real wealth growth in Russia reveals the driver of voter approval for Putin administration since 2000 has been rising income, rising savings, rising net worth: 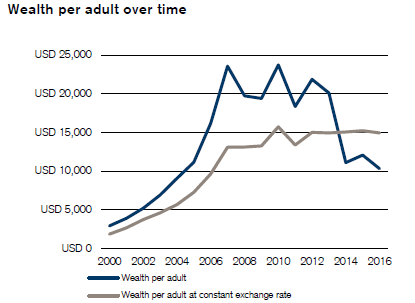 
Most of the asset value in this figure has been contributed by the Russian real estate bubble. Devaluation has done more than prick this bubble, flattening the grey line and driving it downwards this year. Devaluation, accompanied by cutbacks in corporate investment and state budget outlays, are also driving the cash element of wealth downwards, and thus the net worth figure for Russians. 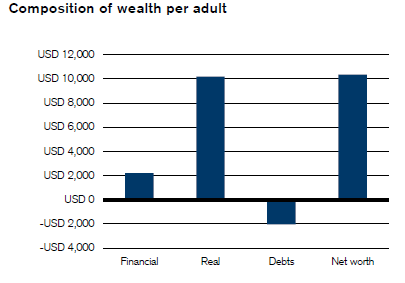 
Early this month Credit Suisse finalized a fresh report on consumer expectations in Russia and other emerging markets. The Swiss bank’s forecast for Russia is a two-way bet. “The potential turnaround point will still depend on the direction of oil prices, the Central Bank of Russia’s stance on monetary policy and the government’s potential decision to increase pensions and public sector employee salaries as the elections approach. A further strengthening of the ruble would pave the way for increased purchasing of consumer electronics and other durable items, although we expect a lag between macroeconomic stabilization and a sustainable recovery of consumption until wage inflation improves more robustly.”


Russian analysts interviewed this week say approval for Putin does not translate into either consumer confidence, or expectation of growth in real income. Russian consumers don’t run up bigger bills in cash or on credit at smartphone outlets or car dealers as a consequence of their view that Putin is the country’s best hope in present and foreseeable circumstances.

On the other hand, there is consensus among the analysts that deterioration of income, living standards, and real income does turn into voter disapproval of the performance of Prime Minister Dmitry Medvedev and also of government ministries:

TRAJECTORY OF THE GOVERNMENT’S RATINGS

As can be seen from the charts, the Medvedev rating at the moment is net positive, 52% to 47%, while the government rating is equally divided, 49% and 49%. The payment of the lump-sum pension in January, and the subsequent indexation of pensions, have neutralized the negative approval trend for Medvedev and the government. But not by much, and not for long.


The reason Putin isn’t blamed for the reversals in the economy, but Medvedev and the government are, is the regime change strategy of the US and EU. If the Americans hadn’t been trying so hard to overthrow him, as Russians perceive this, domestic public opinion would have moved against the president. Instead, Putin has been able to wrap himself in the flag. Opposition to him inside the country, and criticism outside the country, make no obvious dent, because the rating is, in practice, approval of the country itself

So, is there an opportunity for US warfighters like General James ‘Mad Dog’ Mattis, the new Secretary of Defense (below, left), to upset Putin? 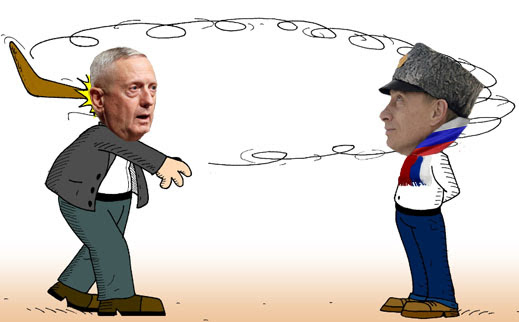 By intervening in the domestic economy, the consensus of Russian analysts is no. Among the political opposition, no. What about fresh US military moves on the Ukrainian and Syrian fronts, in the Black and Baltic Seas, or in cyber warfare? It is already clear that US military tactics turn out to be a boomerang – they trigger more, not less support for Putin.
Posted by Gorilla Radio Blog at Monday, March 27, 2017