A Democratic Spew Party: Getting Past the Pea Soup 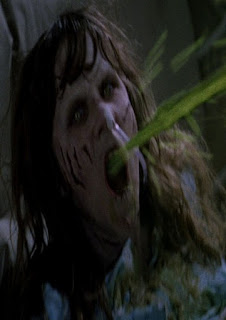 When I think of the Democratic Party these days, the image instantly comes to mind of little Linda Blair playing the demon-possessed child in the classic horror movie, The Exorcist (1973), most particularly the scene in which she spews a stream of pea soup-like projectile vomit into the face of kindly old Max von Sydow, as Father Merrin, the priest come to rescue her.

The pea soup represents the sort of ideology that the Democratic Party has spewed out in recent years — a toxic mush of racial identity politics, contempt for men, infantile entitlement tantrums, corporate whoring, and a demonic quest for war with the Russian Federation. Father Merrin, the priest, stands for incorruptible American men, who have been, at last, killed off by this barrage of diabolical idiocy.

Can you think of a single figure in the Democratic faction who dares to oppose the lethal nonsense this party has been sponsoring and spewing? Who are its leaders? Chuck Schumer in the Senate — a mendacious errand boy for Wall Street? Nancy Pelosi in the House, who wears her cluelessness like a laminate of pancake makeup. Got anyone else? Uncle Joe (Biden)? That’s rich. Bernie? (Looks like his wife is about to be indicted on a federal bank fraud rap for running a small Vermont college into the ground. Whoops.)

Who else you got? Governor Andrew Cuomo of New York. I live near Albany, the state capital, and I can assure you that Governor Cuomo is ripely loathed and detested by anyone who has had actual dealings with him. Insiders tell me he makes Nixon look like Mr. Rogers. And this is apart from the fact that he seems to stand for nothing.

I registered as a Democrat in 1972 — largely because good ole Nixon was at the height of his power (just before his fall, of course), and because he was preceded as party leader by Barry Goldwater, who, at the time, was avatar for the John Birch Society and all its poisonous nonsense. The Democratic Party was still deeply imbued with the personality of Franklin Roosevelt, with a frosting of the recent memory of John F. Kennedy and his brother Bobby, tragic, heroic, and glamorous. I was old enough to remember the magic of JFK’s press conferences — a type of performance art that neither Bill Clinton or Barack Obama could match for wit and intelligence — and the charisma of authenticity that Bobby projected in the months before that little creep shot him in the kitchen of the Ambassador Hotel. Even the lugubrious Lyndon Johnson had the heroic quality of a Southerner stepping up to abolish the reign of Jim Crow. 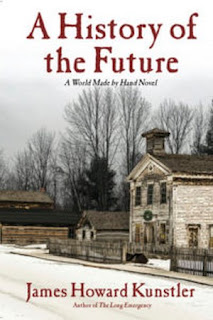 Lately, people refer to this bygone era of the 1960s as “the American High” — and by that they are not talking about smoking dope (though it did go mainstream then), but rather the post World War Two economic high, when American business might truly ruled the planet. Perhaps the seeming strength of American political leaders back then was merely a reflection of the country’s economic power, which since has been squandered and purloined into a matrix of rackets loosely called financialization — a criminal magic act whereby wealth is generated without producing anything of value.

Leaders in such a system are bound to be not just lesser men and women but something less than human. Hillary Clinton, for instance, lost the 2016 election because she came off as demonic, and I mean that pretty literally.

To many Americans, especially the ones swindled by the magic of financialization, she was the reincarnation of the little girl in The Exorcist. Donald Trump, unlikely as it seems — given his oafish and vulgar guise — was assigned the role of exorcist. Unlike poor father Merrin, he sort of succeeded, even to his very own astonishment. I say sort of succeeded because the Democratic Party is still there, infested with all its gibbering demons, but it has been reduced politically to impotence and appears likely to soon roll over and die.

None of this is to say that the other party, the Republicans, have anything but the feeblest grip on credibility or even an assured continued existence. First of all there is Trump’s obvious plight as a rogue only nominally regarded as party leader (or even member). Then there is the gathering fiasco of neither Trump nor his party being able to deliver remedies for any of the ills of our time that he was elected to fix. The reason for that is simple: the USA has entered Hell, or at least a condition that looks a lot like it. This is not just a matter of a few persons or a party being possessed by demons. We’ve entered a realm that is populated by nothing but demons — of our own design, by the way.

Our politics have become so thoroughly demonic, that the sort of exorcism America needs now can only come from outside politics. It’s coming, too. It’s on its way. It will turn our economic situation upside down and inside out. It’s a Technicolor swan, and you can see it coming from a thousand miles out.