Al-Tanaf: US Stand at the Crossroads of Syria Conflict

Dispatch From the Middle East: U.S. Buildup All About Iran Requiring an American wedge between Syria and Iraq 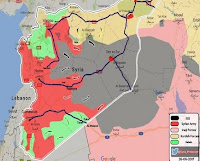 DAMASCUS – As the drive to push ISIS out of its remaining territories in Syria and Iraq rapidly advances, the U.S. and its allied forces have entrenched themselves in the southeastern Syrian border town of al-Tanaf, cutting off a major highway linking Damascus to Baghdad. Defeating ISIS is Washington’s only stated military objective inside Syria. So what are those American troops doing there, blocking a vital artery connecting two Arab allied states in their own fight against terrorism?
The above map commissioned
by the author

“Our presence in al-Tanaf is temporary,” says Col. Ryan Dillon, spokesman for the Combined Joint Task Force of Operation Inherent Resolve (CTFO-OIR), the U.S.-led campaign against ISIS, via phone from Baghdad.

“Our primary reason there is to train partner forces from that area for potential fights against ISIS elsewhere…and to maintain security in that border region.”

Dillon adds for emphasis: “Our fight is not with the (Syrian) regime.”


But since May 18, when U.S. airstrikes targeted Syrian forces and their vehicles approaching al-Tanaf, American forces have shot down two Syrian drones and fired on allied Syrian troops several times, each time citing “self-defense.” In that same period, however, it doesn’t appear that the al-Tanaf-based U.S.-backed militants have even once engaged in combat with ISIS.

Bouthaina Shaaban, political and media advisor to Syrian President Bashar al-Assad, is left bemused by that rhetoric: “When asked what they’re doing in the south of Syria, they say they’re there for their ‘national security,’ but then they object to the movements of the Syrian army – inside Syria?”

She has a point. Under international law, any foreign troop presence inside a sovereign state is illegal unless specifically invited by the recognized governing authority – in this case, Assad’s government, the only Syrian authority recognized by the UN Security Council. Uninvited armies try to circumvent the law by claiming that Syria is “unable or unwilling” to fight ISIS and the threat to international security it poses. But “unwilling and unable” is only a theory, and not law, and since the Russians entered the Syrian military theater to ostensibly fight ISIS with the Syrians, that argument thins considerably.

Colonel Dillon acknowledges the point but argues that the Syrian army “only just showed up recently in the area. If they can show that they are capable of fighting and defeating ISIS, then we don’t have to be there and that is less work for us and would be welcome.”

It’s not clear who made the U.S. arbiters of such a ruling. Syria’s fight against ISIS has picked up considerably in recent months, since four “de-escalation zones” were established during May negotiations in Astana among Russia, Turkey, and Iran. Reconciliation agreements among government forces and some militant groups in those zones – and the transfer of other militants to the northern governorate of Idlib – has meant that Syrian allied forces have been able to move their attention away from strategic areas in the west and concentrate on the ISIS fight in the east of the country.

An April 2017 report by IHS Markit, the leading UK security and defense information provider, asserts that the Islamic State fought Syrian government forces more than any other opponent over the past 12 months.

“Between 1 April 2016 and 31 March 2017,” says the organization, “43 percent of all Islamic State fighting in Syria was directed against President Assad’s forces, 17 against the U.S.-backed Syrian Democratic Forces (SDF) and the remaining 40 percent involved fighting rival Sunni opposition groups – in particular, those who formed part of the Turkey-backed Euphrates Shield coalition.”

In other words, during the period when IS territorial losses were most significant, Syrian forces fought ISIS more than twice as often as U.S.-backed ones.

An American Wedge Between Syria and Iraq


So what’s with the continued U.S. presence in al-Tanaf, an area where there is no ISIS presence and where the Syrian army and its allies have been making huge progress against their militant Islamist opponents?

If you look at the map commissioned by the author above, there are approximately three main highway crossings from major Syrian centers into Iraq. The northern-most border highway is currently under the control of U.S.-backed Kurdish forces who seek to carve out an independent statelet called Western Kurdistan.

The Homs-to-Baghdad highway in the middle of the map cuts through ISIS-besieged Deir ez-Zor, where up to 120,000 civilians have been protected by some 10,000 Syrian troops since ISIS stormed its environs in 2014. While that border point to Iraq is currently blocked by the terror group, Syrian forces are advancing rapidly from the west, north, and south to wrest the region back from ISIS control.

The Damascus-to-Baghdad highway in the south of the country, which allied Syrian forces have largely recaptured from militants, could have easily been the first unobstructed route between Syria and Iraq. Until, of course, U.S.-led forces entrenched themselves in al-Tanaf and blocked that path.

The Syrians cleared most of the highway this year, but have been inhibited from reaching the border by a unilaterally-declared “deconfliction zone” established by U.S.-led coalition forces.

“It was agreed upon with the Russians that this was a deconfliction zone,” says CJTF spokesman Dillon.

“I don’t know anything about such zones. This must be some territory, which the coalition unilaterally declared and where it probably believes to have a sole right to take action. We cannot recognize such zones.”


Since regime-change plans fell flat in Syria, Beltway hawks have been advocating for the partitioning of Syria into at least three zones of influence – a buffer zone for Israel and Jordan in the south, a pro-U.S. Kurdish entity along the north and north-east, and control over the Syrian-Iraqi border.

But clashes with Syrian forces along the road to al-Tanaf have now created an ‘unintended consequence’ for the U.S.’s border plans. Syrian allied troops circumvented the al-Tanaf problem a few weeks ago by establishing border contact with Iraqi forces further north, thereby blocking off access for U.S. allies in the south. And Iraqi security forces have now reached al-Waleed border crossing, on Iraq’s side of the border from al-Tanaf, which means U.S.-led forces are now pinned between Iraqis and Syrians on the Damascus-Baghdad road.

When Syrians and Iraqis bypassed the al-Tanaf area and headed northward to establish border contact, another important set of facts was created on the ground. U.S. coalition forces are now cut off – at least from the south of Syria – from fighting ISIS in the northeast. This is a real setback for Washington’s plans to block direct Syrian-Iraqi border flows and score its own dazzling victory against ISIS. As Syrian forces head toward Deir ez-Zor, U.S.-backed forces’ participation in the battle to liberate that strategic area will now be limited to the Kurd-dominated Syrian Democratic Forces (SDF) from the north, while Syrian forces have established safe passage from the north, south, west – and potentially from the east, with the aid of allied Iraqi forces.

Why Washington Wants That Border


Re-establishing Syrian control over the highway running from Deir ez-Zor to Albu Kamal and al-Qaim is also a priority for Syria’s allies in Iran. Dr. Masoud Asadollahi, a Damascus-based expert in Middle East affairs explains:

“The road through Albu Kamal is Iran’s favored option – it is a shorter path to Baghdad, safer, and runs through green, habitable areas. The M1 highway (Damascus-Baghdad) is more dangerous for Iran because it runs through Iraq’s Anbar province and areas that are mostly desert.”


If the U.S. objective in al-Tanaf was to block the southern highway between Syria and Iraq, thereby cutting off Iran’s land access to the borders of Palestine, they have been badly outmaneuvered. Syrian, Iraqi, and allied troops have now essentially trapped the U.S.-led forces in a fairly useless triangle down south, and created a new triangle (between Palmyra, Deir ez-Zor, and Albu Kamal) for their “final battle” against ISIS.

“The Americans always plan for one outcome and then get another one that is unintended,” observes Iran’s new envoy to Syria, Ambassador Javad Turk Abadi.


He and others in Damascus remain optimistic that the border routes long been denied to regional states will re-open in short order.

“Through the era of the Silk Road, the pathway between Syria, Iran, and Iraq was always active – until colonialism came to the region,” explains Turk Abadi.


In the same way that Western great powers have always sought to keep Russia and China apart, in the Middle East, that same divide-and-rule doctrine has been applied for decades to maintaining a wedge between Syria and Iraq.

“In the history of the last half century, it was always prevented for Syria and Iraq to get close, to coordinate. When (former Syrian president) Hafez al-Assad and (former Iraqi president) Ahmed Hassan al-Bakr almost reached a comprehensive agreement, Saddam Hussein made a coup d’etat and hung all the officers who wanted rapprochement with Syria,”says Shaaban, who has just published a book on Hafez Assad’s dealings with former U.S. Secretary of State Henry Kissinger.


Saddam then launched an eight-year war against the Islamic Republic of Iran, and the latter lost road access through Iraq for more than two decades. In early 2003, U.S. troops invaded Iraq, deposed Saddam, and occupied the country for the next nine years. During that era, Iranian airplanes were often ordered down for inspections, instigated by U.S. occupation forces interested in thwarting Iran’s transfer of weapons and supplies to the Lebanese resistance group Hezbollah and other allies.

By the time U.S. troops exited Iraq in late 2011, the Syrian conflict was already under way, fully armed, financed, and supported by several NATO states and their Persian Gulf allies.

“When those borders are re-opened,” says Asadollahi, “this will be the first time Iran will have a land route to Syria and Palestine” – though others point out that the Iranians have always found ways to transport goods undetected.

“Our army is now almost at the border and Iraqis are at their border – and we are not going to stop,” insists Shaaban.


Syrian and Iraqi forces have not yet checkmated American forces operating in their military theaters. There is still talk of an escalation that may pit the United States against Syria’s powerful Russian ally, a dangerous development that could precipitate a regional or global war.

But in Baghdad, the U.S.-led coalition spokesman Colonel Dillon struck a slightly more nuanced tone from the more belligerent threats sounded in Washington:

“We’re not in Syria to grab land. If the Syrian regime can show they can defeat ISIS, then we’re fine with that. The Waleed border crossing is a good sign that shows these capabilities. We are open to secure borders both on the Syrian and Iraqi side. We’re not there with the intent to block anything, we’re there to defeat ISIS and train forces for that.”


The fact is, US-trained militants in the al-Tanaf garrison are not fighting ISIS today, and they suffered a “crippling defeat” in June 2016 when they last launched a major offensive against the terror group, 200 miles from al-Tanaf. Factoring in geography, balance of field forces and momentum, it is implausible that US troops and their proxies on the southern Syrian-Iraqi border can achieve their stated objectives. It is time for them to surrender their positions to the Syrian state.

Sharmine Narwani is a commentator and analyst of Mideast geopolitics, based in Beirut.