John Pilger made the following remarks in presenting the 15th Martha Gellhorn Prize to the American journalist Robert Parry at a dinner in London on 27 June 2017... 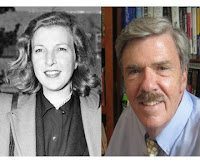 There are too many awards for journalism. Too many simply celebrate the status quo. The idea that journalists ought to challenge the status quo - what Orwell called Newspeak and Robert Parry calls 'groupthink' - is becoming increasingly rare.

More than a generation ago, a space opened up for a journalism that dissented from the groupthink and flourished briefly and often tenuously in the press and broadcasting.

Today, that space has almost closed in the so-called mainstream media. The best journalists have become - often against their will - dissidents.

The Martha Gellhorn Prize for Journalism recognises these honourable exceptions. It is very different from other prizes. Let me quote in full why we give this award:

'The Gellhorn Prize is in honour of one of the 20th century's greatest reporters. It is awarded to a journalist whose work has penetrated the established version of events and told an unpalatable truth - a truth validated by powerful facts that expose what Martha Gellhorn called "official drivel". She meant establishment propaganda.'


Martha was renowned as a war reporter. Her dispatches from Spain in the 1930s and D-Day in 1944 are classics. But she was more than that. As both a reporter and a committed humanitarian, she was a pioneer: one of the first in Vietnam to report what she called 'a new kind of war against civilians': a precursor to the wars of today.

She was the reason I was sent to Vietnam as a reporter. My editor had spread across his desk her articles that had run in the Guardian and the St Louis Post-Dispatch. A headline read, 'Targeting the people.' For that series, she was placed on a black-list by the US military and never allowed to return to South Vietnam.

She and I became good friends. Indeed, all my fellow judges of the Martha Gellhorn Prize - Sandy and Shirlee Matthews, James Fox, Jeremy Harding - have that in common. We keep her memory.

She was indefatigable. She would call very early in the morning and open up the conversation with one of her favourite expressions - 'I smell a rat'.

When, in 1990, President George Bush Senior invaded Panama on the pretext of nabbing his old CIA buddy General Noriega, the embedded media made almost no mention of civilian suffering.

My phone rang. 'I smell a rat', said a familiar voice.

Within 24 hours Martha was on a plane to Panama. She was then in her 80s. She went straight to the barrios of Panama City, and walked from door to door, interviewing ordinary people. That was the way she worked - in apartheid South Africa, in the favelas of Brazil, in the villages of Vietnam.

She estimated that the American bombing and invasion of Panama had killed at least 6,000 people.

She flew to Washington and stood up at a press conference at the Pentagon and asked a general:

'Why did you kill so many people then lie about it?'


Imagine that question being asked today. And that is what we are honouring this evening. Truth-telling, and the courage to find out, to ask the forbidden question.

I first heard of Bob Parry in the 1980s when he broke the Iran-Contra scandal as an Associated Press reporter. This was a story as important as Watergate. Some would say it was more important.

Bob Parry's career has been devoted to finding out, lifting rocks - and supporting others who do the same.

In the 1990s, he supported Gary Webb, who revealed that the Reagan administration had allowed the Contras to traffic cocaine in the US. For this, Webb was crucified by the so-called mainstream media, and took his own life. Lifting the big rocks can be as dangerous as a war zone.

In 1995, Parry founded his own news service, the Consortium for Independent Journalism. But, really, there was just him. Today, his website consortiumnews.com reflects the authority and dissidence that marks Parry's career.

What he does is make sense of the news - why Saudi Arabia should be held accountable; why the invasion of Libya was a folly and a crime; why the New York Times is an apologist for great power; why Hillary Clinton and Donald Trump have much in common; why Russia is not our enemy; why history is critical to understanding.