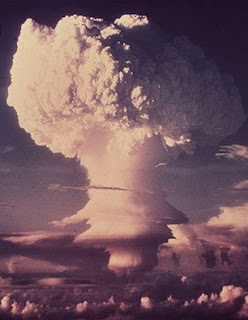 BÜCHEL AIR BASE, Germany - The juxtaposition of nuclear weapons and ordinary farms is the same here as at home in the United States. Just outside this jet fighter base — where a peace camp focused on ridding the site of its 20 US nuclear bombs has been set since March 26 — farmers plant oats, corn and wheat right up to the fences.

Likewise in “the states,” nuclear submarine bases, bomber bases, and land-based missiles are placed in farmland too, where the hard-scrabble struggle to produce food is mirrored against the gargantuan waste of limitless military spending — in this case maintaining an arsenal that can never be legally put to use.

Photo by Public.Resource.Org | CC BY 2.0

This week, local farmers are harvesting oats, cutting swaths 4 to 6 meters wide with their groaning, screeching combines that look something like giant hammerhead sharks, or long-extinct dinosaurs.

Just like at home, the combines are followed, if the weather holds, by heavy balers that bind up the straw; just like in the Midwest, jet fighters overhead practice war fighting in the same sky that warms and waters the crops. On the edge of camp, Guernsey cows meander near the paved bike path, ignoring the spray-painted warning:


The noise of heavy farm machinery is a relief from the howling roar of the German Tornado jet fighter-bombers that scream off the runway most weekdays. The jets shriek like rockets all day long and well past dusk. They reportedly burn through €50,000 ($59,000) every hour they’re airborne. Farmers can rightfully cringe. How many of them can expect to make that much in a year — even though they work harder, longer hours and actually produce something?

The peace camp, with its theme “Büchel is Everywhere,” reflects and teaches these stark contrasts and lost chances every moment of every day. The modest camp has a large cook tent, a kitchen run on bottle gas, tables, chairs and cookware for 40, a makeshift shower, chemical toilets, and a wood fire for evening gatherings. This summer’s climate is just like Wisconsin’s or Minnesota’s — although the local weather includes the “heat” of 20 US Air Force B61 hydrogen bombs deployed in bunkers across right down road. The Bombs make for a sort of raised temperature that permeates the consciousness — unless you’re in denial. Farm machines chug across the fields at a mile-an-hour; the jets howl across the sky at 921 mph — 1,490 mph when up high.

Political, ethical, and practical opposition to US nuclear weapons in Germany goes back decades. In 1997, peace researchers discovered the deployment of 20 Cold War era B61s here and began raising hell. Legally, the bombs are a clear violation of the 1968 Nuclear Non-proliferation Treaty (NPT) — which is binds both Germany and the United States. Article I prohibits nuclear weapons from being transferred to or the accepted by any other state. The NPT, and Germany’s post-war constitution, have been the legal foundation of anti-nuclear civil resistance actions at Büchel because German law is especially keen about the horrifying results of obeying unlawful orders.

Condemnation of the US H-bombs and Germany’s part in the Tornado’s “nuclear mission” — German pilots train to “deliver” the US Bombs — is nearly universal, crossing party lines and cultural divides. Even skin-head neo-Nazis offered (unsuccessfully) to be part of the “US Nukes Out!” campaign. So hot a potato is the status of illegal US nukes here that the base commander himself, “Oberstleutnant” Gregor Schlemmer, chose to leave his office and come out to an active blockade of his base’s main entrance July 18 to greet members of our US delegation. NATO ministers, former heads of state, and dozens of retired military officials have all called the US B61s “Cold War relics” that no longer serve any purpose. Almost 90 percent of German adults want them gone. Perhaps commander Schlemmer feels the weight too, and looks forward to retiring and maybe doing some farming.

Peace camp participants watch the grain being brought in under the harvest moon and recall the hundreds of activists, dozens of nonviolent actions, and scores of news reports that were brought together by the 20 weeks from March to August. Blockades, vigils, concerts, “go-in” actions, and marches have forced the reluctant media to take note of US nukes in Germany.

Of course nuclear weapons are the last thing people want to contemplate, especially in summer, so it takes some focused inventiveness to get the media to face the Bomb. A final blockade is planned for August 9, the anniversary of the US atomic attack on Nagasaki, Japan. Beyond that dreadful consideration, and the close of camp, German abolitionists plan to focus on pushing the ouster of US nukes as an issue in September’s national elections.

And from both sides of the Atlantic, organizers are working to cancel US plans to deploy a new B61 in Europe, and to spend $1 trillion over 30 years making new Bombs, rather than retiring them all permanently and getting on with joining the new international treaty ban.

From inside and outside the air base gates, farmers and nuclear war gamers alike, oberstleutnants and agronomists, may agree that ploughshares are needed more today than illegal bombs.

John LaForge is a Co-director of Nukewatch, a peace and environmental justice group in Wisconsin, and edits its newsletter.