Theresa May and the Unmistakable Stank of Imperial Decay

The Stench of Imperialism: The Statement of Theresa May 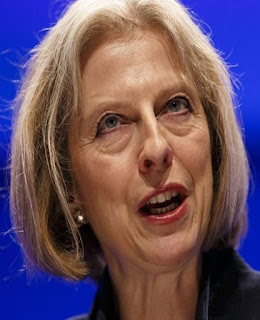 On April 16 British prime minister, Theresa May made a speech to parliament setting out “justifications” for Britain’s participation in aggression against Syria in the dead-of-night missile attack of April 14. Throughout her speech she dramatically referred to barrel bombs and the smell of gas in the air yet in the hall where she spoke it was the stench of imperialism that filled the air.

Like all fascists serving the cause of imperialism and capitalist exploitation of working people the world over who rely on created illusions to stay in power, she repeated the same mantra of false accusation against Syria and Russia as have all NATO leaders in obedience to the imperial overlord.

There is no democracy when the people who have hold of the government machine lie to the rest to accomplish their crimes. That is what she has done, at length, in fact committing treason, by misinforming parliament and the British people about the reasons for the aggression against Syria which have nothing to do with chemical weapons, the pretext, and everything to do with the geo-political and geo-strategic ambitions of the USA, Britain and France to control the resources of the middle east and beyond to Iran, Afghanistan and finally Russia itself. Their ambition is not to save people, as May claims, but to destroy any sovereign government that gets in their way and the consequences for the people of those countries be damned.

Her speech was blatant war propaganda, designed to incite the people to call for war. But more than distorting and fabricating facts, she and the other NATO powers purport, once again, to rewrite international law and purport to make themselves the supremos of international law, in effect tearing up the Charter of the United Nations. Their law, is might makes right, and the world must tremble as it waits the next blow.

May stated, with all her stunning humbug,

“The Leader of the Opposition has said that he can “only countenance involvement in Syria if there is UN authority behind it. The House should be clear that would mean a Russian veto on our foreign policy. ”


Yes, indeed it would Mrs. May, exactly as its designed to do and as Britain agreed to when it became a member of the United Nations. Application of force against a sovereign country can only take place if the Security Council agrees. Action taken in violation of the UN Charter is an act of aggression, the primary war crime from which all others flow. Those that are involved in ordering, arranging and taking part in such military aggression are war criminals. That is the law.

But Mrs. May doesn’t like the law so decides to evade it by false statements of what the law is. She states,

“When the Cabinet met on Thursday we considered the advice of the Attorney General. Based on this advice we agreed that it was not just morally right but also legally right to take military action, together with our closest allies, to alleviate further humanitarian suffering.”


That statement is a lie. It was neither morally right, since there was no credible evidence presented that a crime had been committed, nor legally right, since the attack was conducted without UN approval, and was carried out not as a punishment but as an act of aggression.

“This was not about intervening in a civil war. And it was not about regime change. It was about a limited, targeted and effective strike that sought to alleviate the humanitarian suffering of the Syrian people by degrading the Syrian Regime’s chemical weapons capability and deterring their use.”


Another string of lies, for it is not a civil war but a war of international aggression against Syria by Britain, the USA and their allies and the Syrians long ago eliminated their chemical weapons stocks and equipment as certified by the USA itself and the UN and other bodies. 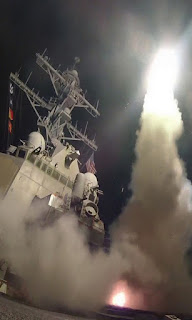 In fact, two cruise missiles failed to explode and were located almost intact and handed over by the Syrians to the Russians to examine. So it was completely ineffective except to confirm their intentions to continue their aggression against Syria and Russia.

The attack was not meant to “alleviate suffering of the Syrian people” but to add to and prolong their suffering by trying to degrade and destroy their ability to defend themselves against the proxy forces of the west who have slaughtered them for these many years. And no it was not about “regime change” for there is no “regime” in Syria, but a government duly elected by the people.

The attack was about trying to overthrow the sovereign government of Syria against the will of its people, and the will of the civilized world.


“And we have published the legal basis for this. It required three conditions to be met. So governments of all colours have long considered that military action, on an exceptional basis, where necessary and proportionate, and as a last resort, to avert an overwhelming humanitarian catastrophe is permissible under international law.”


Another lie, because “governments of all colours” means only the NATO powers and because vigilante military action by one nation-state or a gang of them against another constitutes the crime of aggression. There is no “humanitarian intervention” doctrine known to international law. It’s a fascist invention for fascist purposes; conquering the world for the pursuit of profit against all the laws of civilization, disguised by invented quasi-legal sounding phrases. The “humanitarian intervention” doctrine, sometimes known as the “responsibility to protect” is nothing but an expression of their supreme hypocrisy, an admission of their moral degradation, their fascist morality and justice. For not only does it destroy the fabric of the UN Charter and allow aggression by any nation based on all sorts of pretexts and lead to world chaos, it can never be applied to them.

It is not a doctrine of universal application but of selected application, to be used only against those that stand in their way; one law for them, another law for the rest. For a “law” that is only applied by the powerful against the weak and can never be applied against the powerful is not a just law and as St. Augustine said ‘an unjust law is no law at all’. But they know this as they spout their lies and laugh up their sleeves at those that believe them or pretend to.

May then raved on about there being convincing evidence of a chemical attack when there is none. On the 19th of April the Russian ambassador showed a video to the Security Council of an interview with a Syrian boy and his father explaining how the British intelligence service connected group, the White Helmets, staged the scene for their videos. May compounded her crime by bragging that these bogus reasons were the same reasons used by NATO in its aggression against Yugoslavia in 1999 which she calls an “intervention,” their euphemism for international gangsterism. She then babbled that the reason they did not wait for an investigation by the OPCW team already on its way to Syria was due to Russian interference when Russia and Syria had paved the way for the team to do its work and then, tongue in cheek, eyes fluttering, nose lengthening with each word, like Pinocchio, she stated that she had not followed Washington’s orders but had committed the crimes all on her own. But the indictment to be drafted in her war crimes trial will include the count of conspiracy against her for agreeing with the US and France to attack Syria.

Then, near the end of her speech she referred to the Skripal affair, once again accusing Russia of being involved, and yet not once informing the people as to the whereabouts of the Skripals who have not been seen since the incident was claimed to have taken place. They have simply been disappeared.

On the BBC in an interview on April 18th, Prime Minister Trudeau of Canada, in London for a visit, adopted exactly the same words that May used in her speech, in a fawning, servile expression of Canada’s role as bum-boy of the USA making himself liable for prosecution as a war criminal as well. The other “allies” of the USA followed suit and so the world continues its descent into disorder, chaos and war as these gangsters run amok on behalf of their capitalist class, making money off the backs of the dead and maimed, off the backs of the working people who pay for the wars while they get rich. The war on “terror” which was always a phoney war, is now over and the war on Russia and its allies is openly declared. More anti-Russian “sanctions”, meaning economic warfare, are pending, designed to make life miserable for Russians, warfare that the Russian foreign minister, Sergei Lavrov, in an interview on BBC’s Hard Talk programme, stated, rightly, was tantamount to trying to commit genocide against the Russian people.

And where is the International Criminal Court in all this as war crimes are committed on a daily basis by these thugs? Not a word said. The prosecutor may not have jurisdiction over Syria but she has a moral obligation to speak out and condemn these crimes as violations not only of the United Nations Charter but also of the Nuremberg Principles, the Geneva Conventions and the Treaty of Rome. Instead, she sits n her office in The Hague, drinking tea and wondering how to spend her large salary, and making herself and the ICC a laughable irrelevancy.

International justice is dead, and swings from a tree, lynched by the NATO powers and their allies. World peace lies on the ground covered in blood, her throat cut from ear to ear. Freedom of speech and association are on the run, pursued by the hounds of propaganda, government, mass media intimidation and outright censorship and the risk of world war is now ever present. Yet the people, aside from a few groups and individuals, a mass drugged by propaganda and the struggle of their daily lives, say nothing, do nothing against these criminals to bring them under control,

And so there is only one certainty; that these wars will continue until the imperialism that drives it is defeated. But to do that the capitalist system itself has to be brought down and since there is little chance of that happening any time soon the matter will be decided by war, and a world war, beyond anyone’s imagining or comprehension.

Christopher Black is an international criminal lawyer based in Toronto. He is known for a number of high-profile war crimes cases and recently published his novel “Beneath the Clouds. He writes essays on international law, politics and world events, especially for the online magazine “New Eastern Outlook.”