If a chemical weapons “attack” comes to pass in the place it has been predicted, it would be the first such provocation blamed on Assad to take place in territory occupied by a foreign power, likely triggering an intensified military response from the U.S. 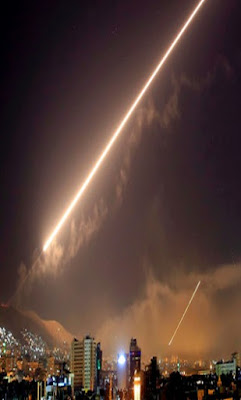 Though last month’s unilateral bombing of Syria by the U.S., U.K. and France came and went, the threat of foreign military intervention targeting the Syrian government remains, particularly given Syria’s success in defeating the foreign-funded terrorist proxies that have prolonged the Syrian conflict for seven long years. While Israel seems to have taken it upon itself to militarily intervene in Syria to prevent the Syrian government from continuing to reclaim its lost territory, the other major powers that have long sought the end of Syrian President Bashar al-Assad have seemed to step back from intervening in Syria, unless another chemical weapons attack were to take place and be blamed on Assad.

For that reason, a recent article, published in early May by Russian news agency RIA Novosti, should raise concern, as it exposes alleged plans for another gas-attack provocation in Syria.

According to the report, preparations for a staged chemical weapons attack began late last month as civilians were relocated to a territory near Jafra oil field in Eastern Syria, where they will participate in a staged filming of a chemical-weapons attack scene. According to South Front, a U.S. military garrison was recently established in this area. The report, based on the testimony of an anonymous member of the Syrian security services, claimed that an attack was being planned by U.S. security services and would employ “prohibited substances” against a group of civilians.

The source also noted that the operation itself was being led by a former Daesh (ISIS) militant, Mishan Idris Hamash. Though this may seem unusual, the U.S. and its proxy force in Eastern Syria, the Syrian Democratic Forces (SDF), have been known to collaborate with former Daesh forces, including militias composed of former Daesh fighters under the SDF banner.

If this report is true, it would not be the first time that such warnings were made public prior to chemical weapons attacks in Syria that were ultimately blamed on the Syrian government. For instance, in late March, the Russian Ministry of Defense had warned that a chemical weapons “provocation” was being planned in Eastern Ghouta by rebel groups in the area as part of a last-ditch attempt to prevent being run out of the Damascus suburb by the Syrian Arab Army. Just a few weeks later, a chemical weapons attack in Douma – widely believed to have been staged – took place and, prior to any investigation, prompted the U.S., U.K. and France to bomb the Syrian government, which they blamed for the attack.

White Helmets still in the game


Given the warning that another staged chemical weapons attack could soon take place in Syria, it seems likely that such an attack will involve the “humanitarian” group of dubious credibility, the White Helmets. Indeed, the evidence of the last chemical weapons attack blamed on the Assad-led government, occurring in Douma of Eastern Ghouta, largely came from the group, whose ties to terrorist groups and pro-regime-change foreign governments have been the subject of several reports at MintPress and elsewhere.

Yet the White Helmets have been in the news as of late as a result of the fact that the State Department has put the funds it has long provided to the group, a third of the White Helmets’ total funding, under “active review.” As a result, given the threat of withheld funds, the case has been made that the White Helmets would be unlikely to participate in any upcoming staged provocations, particularly in an area controlled by the U.S. and its proxies.

However, the withholding of funds from the U.S. is largely a sham. While the funds are “under active review,” U.S. funding of the White Helmets remains in effect while that review is taking place. According to State Department spokeswoman Heather Nauert, during the review period, “all of their work still continues, peoples bills are still being paid […] as far as I know [all U.S. contributions] are still in play.”

Other evidence suggesting that the White Helmets’ funding freeze is not at all what it seems is the fact that the group was just given the McCain Institute’s “Award for Courage and Leadership” for 2018 and that the State Department has already tried to back-pedal claims that it was cutting funds for the group.

@McCainInstitute
At 2018 Sedona Forum, the McCain Institute presented its annual Award for Courage and Leadership to @SyriaCivilDef for their heroic, brave work conducting volunteer search & rescue missions in Syria.


On May 4, VICE News quoted an unnamed State Department spokesperson as saying, “the U.S. jointly supports the White Helmets with other donors, and we expect their operations to continue as a result of additional multilateral donations.” Thus, the fact that funds have not actually been cut off to the group negates the thinking that its purported status change would limit its participation in a staged chemical weapons attack.

Furthermore — as Vanessa Beeley, independent journalist and well-known expert on the White Helmets, recently wrote at 21st Century Wire — the U.S. “funding freeze” on the White Helmets may be just another Trump administration fake-out prior to a staged chemical attack. Indeed, prior to the alleged attack in April in Douma, Trump had promised to withdraw U.S. forces from Syria, but quickly changed his tune after the alleged gas attack.

A step up in false-flag provocation?


If a chemical weapons attack is again being planned, as reports suggest, this provocation would likely be more significant than previous such attacks and would likely result in a more drastic response from Western powers. This is because Jafra oil field, where the staged attack is allegedly being planned/staged, lies within the portion of the Deir Ez Zor governorate that is under the control of the United States and its armed proxy group, the SDF. Past chemical weapons attacks that have been blamed on the Syrian government, have all occurred in areas held by Syrian rebel groups, such as Idlib province and Eastern Ghouta. If such an attack comes to pass, it would be the first such provocation blamed on Assad to take place in territory occupied by a foreign power.

This is significant, as it would open the door to a greater show of American military force as retaliation. While past U.S. interventions that have followed alleged chemical weapons attacks have been justified out of concern for Syrian civilians, a subsequent intervention would instead be justified as having endangered U.S. military assets and allies, warranting a larger response. Indeed, U.S. special forces have been shown to be embedded with SDF forces in some areas. U.S.-backed anti-government Syrian rebels surround a piece of artillery while
speaking to a US special forces member in Syria near Tanf. (Hammurabi’s Justice)

Furthermore, past Syrian government attacks using conventional weapons that have targeted the SDF along the Euphrates have drawn a sharp response from the U.S., namely airstrikes. A chemical weapons attack that is said to have targeted the SDF would surely draw a more significant U.S. military response, regardless of whether or not U.S. troops or military assets are actually threatened.


While no new information has since emerged that would corroborate Novosti’s report, it is true that the U.S. — as the occupying force in the area where the provocation is allegedly being planned – does have a motive to conduct such a false flag attack, as the U.S. and Israel stand to benefit the most were the worst to occur. As MintPress has reported over the course of the war in Syria, the U.S. has long had the goal of regime change in Syria and it – along with many of its allies – have helped foment and prolong the Syrian conflict in pursuit of this end.

However, timing here is key. Such a provocation, and the retaliation it would inspire, would come just as Israel and Syria are the closest to outright war in decades, as Israeli airstrikes targeting Syria earlier this week were extensive and have led to the relocation of significant military assets, including tanks, to the Golan Heights, the portion of southern Syria under illegal Israeli occupation.

Were a U.S. and Western military intervention – provoked by another alleged chemical weapons attack blamed on Assad – to occur while Israel is actively preparing for a major conflict with Syria, it would put pressure on Assad from the U.S.-occupied east while Israel attacks from the south, making any military campaign against the Syrian government much more effective for those forces that have long sought the destruction of the Syrian state.

Whitney Webb is a staff writer for MintPress News and a contributor to Ben Swann’s Truth in Media. Her work has appeared on Global Research, the Ron Paul Institute and 21st Century Wire, among others. She has also made radio and TV appearances on RT and Sputnik. She currently lives with her family in southern Chile.