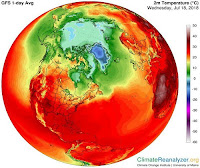 A recent UK newspaper headline read “The World’s On Fire,” is literally true as extraordinary continent-wide wildfires consume the planet, accompanied by unbearable, insufferable, oppressive heat. Europe, North America, Japan, and North Africa are all experiencing unprecedented scorching heat. Which begs the question: When will anthropogenic, or human-caused, global warming be recognized as a reality by America, the second biggest contributor of greenhouse gases (GHG)?

Don’t look for confirmation from the Trump administration, the U.S. Senate or House, the leadership of America (ahem). They are all deniers, and thus have blocked any and all efforts of an American “Marshall Plan” for renewable energy.

The reality is that NASA warned the Senate about human-caused global warming way back in 1988. Thirty years later, the planet burns and America’s government has accomplished next to nothing, a big fat zero! In fact, the U.S. government is rolling back some regulations that slow down CO2 emissions. So, the USA is now onside with global warming, an advocate, all-in for more GHGs stoking more heat.

In sharp contrast to America, resourceful Germany is known as “the world’s first major renewable energy economy.” Over the first six months of 2018, “Germany produces enough renewable energy to power the country’s households for an entire year” (Source: Independent, July 2, 2018).

And, canny China has committed more funding (about $150B) to renewables over the past year than the EU and U.S. combined. As the U.S. looks to coal, China invests in renewable energy. China’s National Energy Administration ordered local governments to give priority access to renewable power generators. (Source: The Global Energiewende, Energy Transition, May 21, 2018)

Heat and fire: People hospitalized; People dying. In Japan alone 80 are dead from a pounding heat wave and 30,000+ hospitalized from heat stroke… oh, only 30,000, which number increases by the hour! Kumagaya 106F; Tokyo 104F.

Stifling heat engulfs the planet. Is this what global warming looks like? If not, then just imagine what the real thing looks like!

Nobody has made an official proclamation about the wherefores or causes of planetary heat, but one has to wonder whether anthropogenic global warming is the vicious monster standing behind the curtain. After all, there’s nobody assigned to officially announce the impact of human-influenced global warming, but it sure feels like it!

Temps like 120F in Chino, California are far, far above normal. And, how about 124F in Quargla, Africa? Or, even more bizarre yet, 74 heat wave deaths in Quebec, way up north.

It is indisputable that the planet is not handling the heat very well, but is it the planet’s fault? Did an angry, upset, abused, never loved Mother Earth wake up one day and decide to burn-up? Doubtful.
More likely, some outside force like Homo sapiens (which is Latin for “wise man”) pushed emissions of greenhouse gases (GHG) too far for far too long.

In fact, the science is absolutely 100% clear: It’s indisputable that, over time, GHGs blanket the atmosphere and act like an oven… imagine that!

Interestingly enough, for some years now climate scientists have warned that global warming is impacting the Arctic 2-3xs faster than the planet as a whole, which, in turn, throws off normal well-defined spinning jet streams at 39,000 feet into wacky deep prolonged loops that alter weather patterns throughout the hemisphere. Take a guess as to what’s happening now….

Answer: In an article in New Scientist, “Warming Arctic Could Be Behind Heatwave Sweeping Northern Hemisphere,” d/d July 24th according to the UK Meteorological Office:

“The heatwave across much of the northern hemisphere could continue for weeks, and possibly even months. And, accelerated warming in the Arctic compared to the rest of the planet could be a key contributor.”


According to Arctic News, Can We Weather The Danger Zone? d/d July 1, 2018: “Earth may have long crossed the 1.5°C guardrail set at the Paris Agreement (2015).” Further to the point, the Danger Zone was likely surpassed as early as 2014 based upon NASA data adjusted to reflect the preindustrial baseline, air temps, and Arctic temps (not in agreement with mainstream science).

And, more distressing yet, according to the same Arctic News story: “The world may also be crossing the higher 2°C guardrail later this year, while temperatures threaten to keep rising dramatically beyond that point.”

What? According to the IPCC and the Paris Agreement 2015, countries “voluntarily” (oh, well) agreed to hold back GHGs to prevent exceeding the dreaded 2°C guardrail until 2100, and hopefully beyond. Wow! It’s not even 2020 yet. Is global warming 80 years ahead of schedule?

The Arctic News article suspiciously reads like the onset of runaway global warming. To confirm that suspicion, Arctic News claims (and here’s where it gets kinda scary crazy):

“…much carbon is stored in large and vulnerable pools that have until now been kept stable by low temperatures. The threat is that rapid temperature rise will hit vulnerable carbon pools hard, making them release huge amounts of greenhouse gases, further contributing to the acceleration of the temperature rise.”

Unfortunately, those massive carbon pools are exposed to unbelievable hot temps recorded at the farthest northern reaches, for example, 92.3°F on the Siberian coastline of the Arctic Ocean, which is permafrost country and methane hydrate territory. Oh really, Miami Beach temps in Siberia?

Maybe the U.S. should alter its climate change/global warming stance re: (1) the Paris ’15 Agreement by joining ASAP and (2) cancel the interminable Republican (mostly) denial about human-caused global warming, or more formally known as: “The Great American Global Warming School of Denial,” nowadays propagated by Trump and minions, especially as runaway global warming appears to be at an incipient stage, or maybe worse.

On the other hand, when is too late too late?

But, then again, thinking more about it: DO SOMETHING!

Robert Hunziker lives in Los Angeles and can be reached at rlhunziker@gmail.com.