Speaking on the sidelines of the UN General Assembly, President Trump said the Maduro government could be "toppled very quickly." 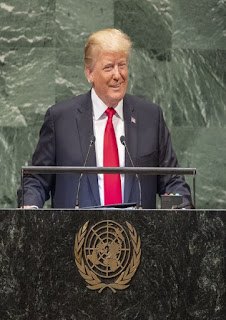 Pays de Gex, France,  – US President Donald Trump took aim at Venezuela at the United Nations Tuesday, hitting Caracas with a fresh round of sanctions and openly talking about the military overthrow of President Nicolas Maduro.

Trump’s speech at the 73rd UN General Assembly (UNGA) dedicated special attention to Venezuela, with the US President claiming that “the socialist dictatorship of Nicolas Maduro has inflicted terrible pain” on the Venezuelan people and vowing “further action” against the South American country. The statements coincided with a new round of sanctions unveiled by the US Treasury Department’s Office of Foreign Assets Control (OFAC) Tuesday, targeting high-ranking Venezuelan figures.

These included the first lady, Cilia Flores, the Vice-President, Delcy Rodriguez, and other members of the cabinet. Assets were also seized from Rafael Sarria, who OFAC claim works as a frontman for Diosdado Cabello, the current President of the National Constituent Assembly.

Besides individual sanctions, which have included President Maduro himself, US actions have put up hurdles for all Venezuelan financial transactions and targeted the ability to service and re-finance debt issued by the Venezuelan government and state oil company PDVSA.

Torino Capital Chief Economist Francisco Rodriguez has argued that US financial sanctions may have played an important role in the collapse of the oil-dependent country’s crude production and consequent worsening of its economic crisis.

While attending the UNGA, Trump also held a press conference with recently elected hard-right Colombian President Ivan Duque in which the US leader claimed that a military coup would succeed easily in Venezuela.

“It’s a regime that, frankly, could be toppled very quickly by the military if the military decides to do that,” said the US President in reply to a journalist.


Trump reiterated on Wednesday that “all options are on the table” with regard to Venezuela.

Earlier this month, the New York Times revealed that US diplomats met repeatedly with dissident Venezuelan military officers who solicited Washington’s support in executing a coup against President Maduro.

The Trump administration has, nonetheless, downplayed the possibility of a direct US military intervention in Venezuela, despite concerns by Chicago Mayor Rahm Emanuel that an “October surprise” may be in the works.

For his part, Navy Vice Admiral Craig Faller indicated during his Senate confirmation hearings to lead US Southern Command that while there were no plans to intervene militarily in the Caribbean nation, normal preparations for “a range of contingencies” were underway.

Trump’s hawkish stance vis-a-vis Caracas was mirrored by regional US allies at the UNGA, with Argentine President Mauricio Macri expressing “concern” for the human rights situation in Venezuela. His Brazilian counterpart Michel Temer, who came to power after what is widely considered a parliamentary coup that ousted former President Dilma Rousseff, echoed those concerns and added that in South America there is “no more room for alternatives to democracy.”

Colombian President Ivan Duque went even further in his speech on Wednesday, stating that “putting an end to the Venezuelan dictatorship is a global challenge” and even claiming that Venezuela is experiencing “the worst humanitarian and migratory crisis in history.”

According to the UN’s International Organization for Migration, an estimated 2.3 million Venezuelans were living abroad as of July 2018. Approximately five million Colombian citizens currently reside in Venezuela, many of whom refugees of Colombia’s over half-century long civil war.


Venezuelan leaders were quick to react to the heated rhetoric and fresh actions coming out of New York.

Speaking at a ceremony in Caracas in which Venezuelan citizenship was granted to more than eight thousand immigrants, President Nicolas Maduro welcomed the latest sanctions as a badge of honor.

“The sanctions, besides being illegal and useless, are a medal, an award that shows that we are brave and on the right track,” he stated.


The Venezuelan President is due to address the UN General Assembly himself on Wednesday afternoon.

For his part, Foreign Minister Jorge Arreaza, who is in New York for the UNGA, also condemned Trump’s threats when speaking to the press.

“It is worrying that President Trump is once more raising the banners of the anachronistic Monroe Doctrine, which is against international law, the UN charter, and multilateralism […]. We have to defend the continent from these unilateral threats,” he said.


Arreaza went on to warn that a foreign military intervention would cause an actual migration crisis and numerous deaths, stressing that the Venezuelan people and armed forces know how to defend themselves.

This work is licensed under a Attribution Non-commercial
No Derivatives Creative Commons license.
Posted by Gorilla Radio Blog at Wednesday, September 26, 2018