In Breach of Human Rights, Netanyahu Supports the Death Penalty against Palestinians 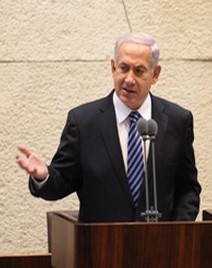 Right-wing Israeli Prime Minister, Benjamin Netanyahu, is escalating his war on the Palestinian people, although for reasons almost entirely related to Israeli politics.

He has just given the greenlight to a legislation that would make it easier for Israeli courts to issue death sentences against Palestinians accused of carrying out ‘terrorist’ acts.

Netanyahu’s decision was made on November 4, but the wrangling over the issue has been taking place for some time. The ‘Death Penalty’ bill has been the rally cry for the Israel Beiteinu party, led by ultra-nationalist Israeli politician and former Defense Minister, Avigdor Lieberman, during its 2015 election campaign.

But when Lieberman attempted to push the bill in the Israeli Knesset (parliament) soon after the forming of the current coalition government in July 2015, the draft was resoundingly defeated by 94 to 6 with Netanyahu himself opposing it.

It has been defeated several times since then. However, the political mood in Israel has shifted in ways that has obliged Netanyahu into conceding to the demands of the even more hawkish politicians within his own government.

As Netanyahu’s coalition grew bolder and more unhinged, the Israeli Prime Minister joined the chorus. It is time “to wipe the smile off the terrorist’s face,” he said in July 2017, while visiting the illegal Jewish settlement of Halamish, following the killing of three settlers. At the time, he called for the death penalty in “severe cases.”

Ultimately, Netanyahu’s position on the issue evolved to become a carbon copy of that of Lieberman. The latter had made the ‘death penalty’ one of his main conditions to join Netanyahu’s coalition.

Last January, the Israel Beiteinu’s proposed bill passed its preliminary reading in the Knesset. Months later, on November 4, the first reading of the bill was approved by Israeli legislators, with the support of Netanyahu himself.


This reality reflects the competing currents in Israeli politics, where the long-reigning Israeli Prime Minister is increasingly embattled, by accusations from within his coalition and outside of being too weak in his handling of the Gaza Resistance.

Coupled with the tightening ring of police investigation pertaining to corruption by Netanyahu, his family and closest aides, the Israeli leader is pounding on Palestinians with every possible opportunity to display his prowess.

Even the likes of former Labor Party leader, Ehud Barak, is attempting to resurrect his failed career as a politician by comparing his past violence against Palestinians with the supposedly weaker Netanyahu.

Netanyahu is “weak”, “afraid” and is unable to take decisive steps to rein in Gaza, “therefore he should go home,” Barak recently said during an interview with Israeli TV Channel 10.

Comparing his supposed heroism with Netanyahu’s ‘surrender’ to Palestinian Resistance, Barak bragged about killing “more than 300 Hamas members (in) three and a half minutes,” when he was the country’s Defense Minister.

Barak’s sinister statement was made with reference to the killing of hundreds of Gazans, including women, children and newly graduated police cadets in Gaza on December 27, 2008. That was the start of a war that killed and wounded thousands of Palestinians and set the stage for more, equally lethal, wars that followed.

When such ominous comments are made by a person considered in Israel’s political lexicon as a ‘dove’, one can only imagine the vengeful political discourse championed by Netanyahu and his extremist coalition.

In Israel, wars – as well as racist laws that target Palestinians – are often the outcome of Israeli politicking. Unchallenged by a strong party and unfazed by United Nations criticism, Israeli leaders continue to flex their muscles, appeal to their radicalized constituency and define their political turfs at the expense of Palestinians.

The Death Penalty bill is no exception


The bill, once enshrined in Israeli law, will expectedly be applied to Palestinians only, because in Israel the term ‘terrorism’ almost always applies to Palestinian Arabs, and hardly, if ever, to Israeli Jews.

Aida Touma-Suleiman, a Palestinian citizen of Israel and one of a few embattled Arab members of the Knesset, like most Palestinians, understands the intentions of the bill.

The law is “intended mainly for the Palestinian people,” she told reporters last January.

“It’s not going to be implemented against Jews who commit terrorist attacks against Palestinians, for sure,” as the bill is drafted and championed by the country’s “extreme right.”


Moreover, the Death Penalty bill must be understood in the larger context of the growing racism and chauvinism in Israel, and the undermining of whatever feeble claim to democracy that Israel possessed, until recently.

On July 19 of this year, the Israeli government approved the Jewish ‘Nation-state Law’ which designates Israel as the ‘nation state of the Jewish people’, while openly denigrating the Palestinian Arab citizens of the state, their culture, language and identity.

As many have feared, Israel’s racist self-definition is now inspiring a host of new laws that would further target and marginalize the country’s native Palestinian inhabitants.

The Death Penalty law would be the icing on the cake in this horrific and unchallenged Israeli agenda that transcends party lines and unites most of the country’s Jewish citizens and politicians in an ongoing hate-fest.

Of course, Israel has already executed hundreds of Palestinians in what is known as “targeted assassinations” and “neutralization”, while killing many more in cold blood.

So, in a sense, the Israeli Bill, once it becomes law, will change little in terms of the bloody dynamics that governs Israel’s behavior.

However, executing Palestinians for resisting Israel’s violent Occupation will further highlight the growing extremism in Israeli society, and the increasing vulnerability of Palestinians.

Just like the ‘Nation-state Law’, the Death Penalty bill targeting Palestinians exposes Israel’s racist nature and complete disregard for international law, a painful reality that should be urgently and openly challenged by the international community.

Those who have allowed themselves to ‘stay on the fence’ as Israel brutalizes Palestinians, should immediately break their silence.

No government, not even Israel, should be allowed to embrace racism and violate human rights so brazenly and without a minimum degree of accountability.

Dr. Ramzy Baroud is an author and a journalist. He is athor of The Second Palestinian Intifada: A Chronicle of a People's Struggle and his latest My Father Was a Freedom Fighter: Gaza's Untold Story. He can be reached at ramzybaroud@hotmail.com.

Read other articles by Ramzy, or visit Ramzy's website.