Literature and Theater During War: Why Euripides Still Matters 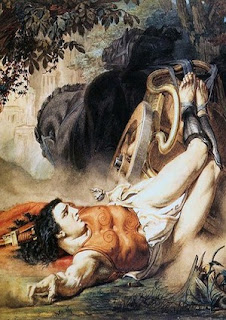 We live under perpetual war. Yet the media and other cultural institutions are silent. They thrive on violence and trivia. I travelled to ancient Greece for an alternative model.

Rereading Euripides’ play, Hippolytus, was gratifying. The play brought together 800 years of Athenian history. The heat of the Peloponnesian War became the mirror for reexamining the past.

I enjoyed the drama of Euripides in my student days, but did not think much about the tragic characters, the myth-history embedded in the play or its implications for Athenians, much less us.

But now, decades later, the tragic play spoke to me directly.

The Death of Hippolytus by
Lawrence Alma-Tadema. (Wiki Commons.)

The heat of war


Euripides’ play reached the theater in 428 BCE, three years after the start of the Peloponnesian War and one year after the death of Pericles, Athens’ preeminent political leader. The Peloponnesian War shook Greece, and Athens in particular, to the core. But why the war? What happened to the leadership of Pericles, the teaching of philosophy and science, the practice of democracy, all that gorgeous art, and the victory over the Persians?

Athens in the fifth century BCE stood at the center of the Golden Age of Greece. Indeed, in some way, Periclean Athens was the Golden Age.

According to the great Athenian historian Thucydides, Pericles bragged that Athens was the school of Hellas – not much different than the claim of American exceptionalism.

Nevertheless, Athens was, if not exceptional, different. Its magnificent city planning and classical art and architecture, philosophy schools, and the Parthenon made it the jewel of the Greek world.

So, why almost half of the city states in mainland Greece joined Sparta spearheading the war against Athens? What went wrong? Had power corrupted Athens?

Euripides lived in Athens. He enjoyed its privileges and power. But the Peloponnesian War was the final Earthquake. He grasped the danger all around Athens. He understood his was a perilous times. Civilization was like a phantasm. It did not take many barbarians to wipe it out. So, he put his talent to work to save Athens. He wanted to boost the national sentiment and examine virtues of long standing. What better way to help reexamine the status quo than tempting the Athenians to look at their origins. Theseus represented the historical beginnings of Athens. No wonder one of the protagonists in Euripides’ play was Theseus, the greatest hero and king of Athens.

Theseus: the king of Athens


Theseus was born in Troezen, a town in the Argolid of southeastern Peloponnesos. He was the son of the Athenian king Aegeus or Poseidon, god of the seas. His mother was Aethra, daughter of Pittheos, king of Troezen. Apparently, Aegeus was childless. He stopped at Pittheos’ palace to try to make sense of the advice he received from the Oracle of Apollo at Delphi.

The old king Pittheos admired Aegeus. He wanted a grandson connected to Aegeus. He feasted the Athenian king, an opportunity that led Aegeus making love to Aethra. Aegeus told her if she had a son, she should send him to Athens carrying a sword and sandals he placed under a heavy stone outside her home.

Another tradition has it that Poseidon made love to Aethra just before Aegeus went to bed with her.

Aethra gave birth to Theseus. She brought him up in Troezen and eventually revealed the stone his father had hidden a sword and sandals for him. Theseus lifted the stone and took the gifts from his father.

His model was Herakles, the supreme Greek hero. Like Herakles, Theseus dedicated his life to improving human wellbeing and building the power of Athens. He killed the bandits and threatening beasts in Attica. He went home to Athens and lived with Aegeus. He flourished a generation before the Trojan War, sometime in the thirteenth century BCE. He considered himself son of Poseidon.


Theseus broke the dominance of Minoan Crete over Athens with his killing of the Minotaur, a monster with a man’s body and the head of a bull. Ariadne, daughter of Minos, assisted Theseus in getting in and out of the labyrinth where the monster lived. Yet Theseus left Crete without Ariadne who ended marrying god Dionysos.

The first wife of Theseus was the Amazon queen Hippolyte. She gave birth to Hippolytus. However, Hippolyte did not live long.

Theseus’ second wife was a princess from Crete named


Phaedra (beaming with joy). She was the daughter of Minos and Pasiphae and sister of Ariadne. This was a big deal for Theseus and Athens. Minos was the son of Zeus. He was so great and powerful a king he gave his name to an entire historical period in the second millennium BCE: Minoan Age.

However, Minos got in trouble with Poseidon because he did nor sacrifice a handsome bull to honor him, sacrificing instead a bull of secondary quality. Poseidon revenged this disrespect by making Pasiphae madly in love with the handsome bull.

Pasiphae instructed Daidalos, a genius in art and engineering at the service of Minos, to construct a cow machine she could use to fulfill her lust with the bull. The outcome was the monster Minotaur, which Theseus slew.

Phaedra: madly in love with Hippolytus


Hippolytus probably heard these stories from his father. The Minoan background of his family played a decisive and tragic role in his short life.

While living in Troezen, he found solace in his piety for Artemis, goddess of nature. He led a life of chastity and had no interest in women, in fact, he hated women.

We don’t know why Hippolytus despised women. We know even less if Theseus was aware of the commitment of his son to stay single and be a faithful follower of Artemis. But just the same, once he brought the young and beautiful Minoan princess Phaedra to his home in Athens, he sent Hippolytus to Troezen with his grandfather Pittheos and grandmother Aethra.

Nevertheless, the inevitable happened. Phaedra saw Hippolytus and she was thunderstruck with passionate love for him. She wanted Hippolytus so badly that she became ill and started thinking of suicide and death. She stopped eating and consumed herself with visions of fulfilled and failed love with Hippolytus.

Phaedra’s nurse, an old wise woman from Crete who had brought her up, immediately figured out the disease eating Phaedra alive. She kept talking to her until Phaedra admitted her disease was Hippolytus. The nurse told her how she could transform Hippolytus from a disease to a drug. Stop destroying yourself, she told Phaedra. Stop acting like a goddess: accept the truth, and seek a solution in a secret love affair with Hippolytus.

The nurse, in fact, went further. She spoke to Hippolytus under oath, that Phaedra was so much in love with him, she was practically dying for his attention. However, Hippolytus would have nothing to do with Phaedra or, for that matter, with any other woman. His celibacy and obsession for Artemis was divorcing him from reality.

Hippolytus cursed and threaten the nurse who had the temerity to offend him with such a preposterous idea he should make love to Phaedra in order to save her life. His misogynism was overwhelming.

Phaedra secretly listened to the bitter exchange between Hippolytus and her nurse. There was no hope now. This news, that she was in love with Hippolytus, would inevitably reach her husband, and that she could not tolerate under any circumstances. She hanged herself, but not before she wrote a poisoned letter to Theseus that Hippolytus seduced her.

The price of hate


Theseus came home and found a dead wife and her letter. Immediately, and without any inquiry, he turned his anger at Hippolytus. He wanted him to suffer and die. In fact, Theseus was so caught up in hate he prayed to his father Poseidon to kill Hippolytus.

Hippolytus in vain defended his innocence. He said to his father he was so removed from love making, he would not even know how to go to bed with a woman. Theseus, however, would have none of that. He wanted him dead. He banished him from Athens.

Hippolytus left with his friends and, not much later, Poseidon did the bidding of Theseus and attacked Hippolytus.

A servant of Hippolytus rushed to Theseus and reported how a bull from the sea scared the horses of Hippolytus, throwing him from the smashed chariot car on rocks. King, the messenger said, your son is on the verge of death. Should we bring him to you?

These tragedies, one after another, traumatized Theseus. Yes, he said to the messenger, bring Hippolytus to me.

At that moment, Artemis entered the palace of Theseus, accusing him for the tragedy of his innocent son. The nearly dead Hippolytus heard the goddess and thanked her for her love. And Theseus, by now convinced Phaedra lied to him, asks forgiveness from his son – who paid with his life for being a model of goodness, piety and virtue, though his hatred for women diminished him. Hippolytus freed his father of all guilt.

This was an unexpected tragedy that challenged Athens and its institutions. The pain was no more acute in the age of Theseus than Euripides’ own time blighted by the Peloponnesian War and the plague, which took the life of Pericles. In both times, politics failed.

Was Pericles acting like Theseus? Shooting first and asking questions later? Did the power of leading the Delian League of Greek allies in protecting Greece from Persia go to his head? Yes, Athens kept the Persians at bay. Yes, the Parthenon was an unmatched masterpiece of art and power. However, the agrarian but war society of Sparta was jealous of shining Athens. Pericles foolishly thought that might makes right: his strong navy could keep Sparta relatively harmless.

And where did the pollution of piety come from? Why should gods compete with each other over mortals? This theology was telling of a broken political contract. It simply did not make sense to have Aphrodite, goddess of love, strike at Hippolytus (through the madness of Phaedra) because he cared less for women and sex and was devoted to another goddess, Artemis.

We don’t know if Euripides’ play made a political difference in post-Periclean Athens at a time of bitter war. It probably didn’t. But it was a statement that rush decisions, much less hate, are bad ingredients for state policies and civilization.

Euripides was a bright light in Greek culture. He balanced Hippolytus’ misogyny with his criticism of young men in love. He felt for the powerless. He was a daring voice of reason speaking in defense of freedom, democracy and virtues. His play weaved Athenian myth-early history to the priorities of his time at war, giving Athenians a chance to understand their opportunities and predicament.

Hippolytus remains a model of literature and theater under the stress of war. Euripides is paradigmatic of a responsible intellectual who did not allow war to cow him into a propagandist. That’s why his plays, like Greek science, literature, art and thought, are timeless.