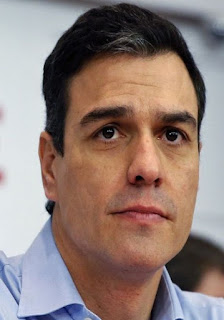 On Friday, two days after his budget was voted down in the Congress, Spanish Socialist Party (PSOE) Prime Minister Pedro Sánchez called a snap general election for April 28. Sanchez’s government, the shortest-lived since Transition from fascist to parliamentary rule in 1978, fell over the state prosecution of Catalan political prisoners who organized or supported the October 1, 2017 independence referendum.

They face up to 25 years in prison on false charges of having instigated violence during the referendum.

“When some parties block the taking of decisions, it is necessary to call new elections,” he said.

“There are parliamentary defeats that are social victories,” he added, claiming that supposedly progressive measures inscribed in the budget that the PSOE is abandoning meant that “citizens have seen what we wanted for the country.”


Other PSOE officials said they were happy to abandon the budget to focus instead on attacking the Catalan nationalists. “It’s too bad the budget was not approved, but paradoxically thanks to that we now have a line. The right cannot throw in our face the accusation of having any agreement with the separatists. It was something that hurt us and that provoked uncertainty in parts of our electorate,” a leading PSOE mayor told El Pais .

The PSOE is opening the door to the most right-wing campaign since 1978, in which the imposition of austerity and police-state rule is to proceed under cover of opposition to Catalan separatism. Elections in 2015 and 2016 produced hung parliaments, as votes split between the PSOE, the right wing Popular Party (PP), Citizens (Cs), and Podemos. Now, while the PSOE denounces the Catalan nationalists, the PP aims to assemble a narrow right wing majority on the basis of an anti-Catalan coalition with Cs and the new, pro-fascist VOX party.

VOX leader Santiago Abascal declared that “the Living Spain,” as he calls his supporters, “has finally defeated an infamous legislature.” He also denounced as “incapable and cowardly” the previous PP government of Mariano Rajoy, for having failed to crack down violently enough on the Catalan independence referendum.

This comment by Abascal, who has defended the genocidal record of Francisco Franco’s fascist army during the Spanish Civil War, underscores that VOX speaks for factions of the bourgeoisie planning military repression of the population.

Under Rajoy, Madrid sent 16,000 police to violently assault voters in the Catalan independence referendum, including the elderly, injuring over 1,000. It then jailed Catalan nationalist politicians in pre-trial detention and dissolved the elected Catalan government, using Article 155 of the 1978 Constitution to replace it with a government named by Madrid. At the height of the crisis, the PP threatened direct military intervention in Catalonia. Nonetheless, Abascal is attacking this record as insufficient. 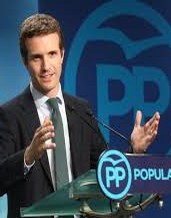 PP leader Pablo Casado, (far right) while calling his party a “calm, moderate force,” stressed that he would work with Citizens and VOX to win a majority.

Citing the “Andalusian pact” where the three parties are in a regional governmental alliance in Andalusia, he stressed the PP would build no “sanitary cordon” walling it off from the explicitly pro-Franco position of VOX. “Sanitary cordons always harm those that build them,” Casado commented, adding that he was fighting the “Popular Front,” that is, the government brought down by Franco’s coup and civil war.

In recent weeks, Casado has also unleashed a torrent of hysterical insults against Sánchez, calling him a “felon,” a “compulsive liar,” “illegitimate,” a “squatter” and guilty of “high treason.”


Similarly, Citizens leader Albert Rivera demanded that “all candidates position themselves” on the Catalan issue. He added that, if elected, he would “promise not to pardon the coup plotters,” that is, the prosecuted Catalan leaders. He warned that there could be a new “Frankenstein government,” with Podemos leader Pablo Iglesias “as deputy prime minister in charge of Spain’s economy and the separatists deciding how my country should be ruled.”

The principal danger in this situation is that the working class is not fully aware of the threat of police and military rule. There is no opposition from the European Union (EU) to the drive to legitimize Francoism, and what passes as opposition within the Spanish political establishment are split between open supporters of the policies of the right, and political indifference.

On Wednesday, Sánchez accused Citizens and the PP of failing to show the same “loyalty” to the government he had shown to the previous conservative government:

“The PP government had the institutional loyalty of the Socialists. But they were not loyal, not only to us, but to Spain.”

He added, “we’ve been willing to compromise with those who think differently. We’re pro-Europe, progressive, left-leaning, and not a single OECD country has had more female ministers than us.”


In government, the PSOE was virtually indistinguishable from the PP. Its fundamental agenda was further austerity for the working class, stepped-up militarism in the service of Spain’s geo-strategic ambitions and re-stabilizing the state after the Catalan independence crisis.

On democratic rights, it continued the PP’s clampdown. They have endorsed so-called “hot returns” of undocumented migrants—quick deportations that bypass immigration laws—at the southern borders of Ceuta and Melilla, and defended the anti-democratic Public Safety Law, better known by its nickname of the “gag law.” On the Catalan court case, the Sánchez government told state attorneys to charge the jailed nationalists under sedition, which carries a 15-year sentence.

Podemos has made clear it will mount no serious opposition to the right-wing campaign. Rather, it is fraudulently claiming that the Podemos-backed PSOE government was a success. Podemos parliamentary spokesperson Irene Montero cited “the most socially progressive budgets in history” as the main accomplishment of that government. But plans for an increased minimum wage, an end to the “gag law” outlawing the filming of police repression of protests, and subsidies for the elderly unemployed—many of which were included in the failed budget—will not pass after this week’s budget vote.

She said that Podemos and the PSOE had “In the eight months … worked to do things pushed by millions of people who have not given up.” In fact, the vote for the PSOE and Podemos collapsed in the last elections held in the most populous region in Spain, Andalusia, as hundreds of thousands refused to support these parties and instead preferred to abstain.

According to Montero, however, Sánchez’s gravest mistake was to not have integrated Podemos in his government. This would have produced a “stable and solid government with which to present itself in Europe.” She also attacked the Catalan nationalists for not having supported the PSOE government, cynically claiming Sánchez was “the best guarantee of an honest and sensible dialogue with Catalonia.”

Asked about possible post-electoral agreements, Montero said that Podemos would “speak with all the legitimate representatives of the citizens,” opening the door to alliances with all parties.

Nothing exposes more clearly the complacent and indifferent attitude of Podemos to the dangers facing the working class more than Montero’s announcement that Iglesias, her partner, would continue on paternity leave during the campaign, in which he is Podemos’ lead candidate. She claimed this is a way of showing what “type of Spain we want,” one in which men and women share household duties.

In fact, it underscores that Podemos is largely unconcerned by the drive towards police-state rule in Spain, which it does not intend to fight seriously.
Posted by Gorilla Radio Blog at Saturday, February 16, 2019