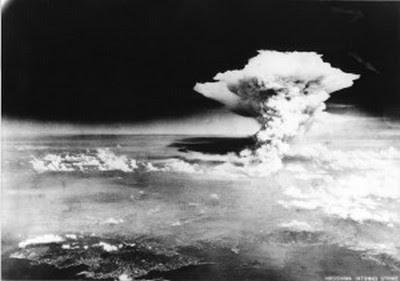 American Values, an excellent Twitter account which publishes daily information about US atrocities, has just posted a thread for the anniversary of the nuclear bombing of Hiroshima, Japan, and I think everyone should have a look at it today.

It reads as follows:

“On this day in 1945, the US committed one the worst [atrocities] in human history when it dropped a nuclear weapon on the Japanese city of Hiroshima, killing 140,000 people. The city was selected for its location in a valley, magnifying the bomb’s deadly power.

“The bomb detonated directly over Shima Surgical Clinic and destroyed 1 square mile, setting fires for 4.7 square miles. 70,000 people were immediately annihilated & 70,000 were wounded. The bombing killed 90% of all medical personnel in the city. The wounded were described by survivors as living pieces of charcoal, wandering mindlessly as their skin fell off until they collapsed and died. Many of the survivors would fall victim of radiation poisoning, some dying violently while vomiting out their insides.

“Astonishingly, just 3 days after the bombing of Hiroshima, the US dropped another atomic bomb on Nagasaki. The bombing was essentially a test, killing 80,000 Japanese in an attempt to see if a plutonium implosion bomb would detonate properly in wartime setting.

“Much of the US propaganda used during the war depicted the Japanese as subhuman and its this attitude that helped the US government justify these atrocities to itself and its population.

“One of the most reprehensible myths surrounding the bombings is the idea that they were ‘necessary’ to save lives. Serious historical work has disproven this. See here -> And here


-> Nevertheless this myth remains because it alleviates the guilt Americans would otherwise feel for their government committing one of humanity’s most atrocious war crimes.”

On this day in 1945, the US committed one the worst atrocious in human history when it dropped a nuclear weapon on the Japanese city of Hiroshima, killing 140,000 people. The city was selected for its location in a valley, magnifying the bomb’s deadly power. pic.twitter.com/rD1NelAoQE
— American Values (@Americas_Crimes) August 6, 2019

For more reading on the historically indisputable fact that America’s decision to unleash the nuclear horror on Japan was a gratuitous act of barbarism which was completely unnecessary for winning the war, see this LA Times article by Oliver Stone and Pete Kuznick and this one by the Mises Institute.

According to the generals and decision makers of the time, the real reason for the use of nuclear weapons on Japan was to intimidate the Soviet Union, which went on to acquire its own nuclear arsenal a mere four years later in 1949. That’s right, the horrors inflicted upon the people of Hiroshima and Nagasaki, and all the brainpower and treasure that went into making them, achieved nothing but a weapons advantage that lasted a total of four years. In exchange for four years of military superiority, we’ve had generations of nuclear standoff which could wipe every living organism off the face of this planet.

So of course we are seeing the neoconservative Washington Free Beacon celebrating this horror on Twitter today.

“74 years ago today, America’s Greatest Generation delivered a decisive blow against the enemies of freedom. The Free Beacon salutes our veterans. #Hiroshima,” the outlet tweeted, with a picture of a mushroom cloud.


The Washington Free Beacon, which the late Antiwar.com founder Justin Raimondo once described as “a down-market version of the Weekly Standard,” has served as a platform for neoconservative war propagandists since its founding. It is published by a think tank chaired by PNAC alum Michael Goldfarb, and its editor-in-chief, Matthew Continetti, is the son-in-law of arch-neocon Bill Kristol.

The American supremacist values system of this tightly knit and highly influential clique of neoconservatives has been shoved so far into the mainstream that it is now in effect the bipartisan consensus worldview of US policymakers and mass media narrative managers, to the point that now if you get a voice like Congresswoman Tulsi Gabbard questioning the US forever war in mainstream circles you immediately see that voice slammed as “un-American“, “isolationist“, and Kremlin-aligned.

The fact that an arm of this influential clique is glorifying an unparalleled act of state-sponsored terrorism is made all the more jarring by the fact that, as an early driver of the bogus Steele dossier, the Washington Free Beacon has played a direct role in escalating the world-threatening nuclear tensions between Russia and America. The Steele dossier, whose sensationalist claims have been invalidated by the Robert Mueller report which found no evidence to support them, played a foundational role in the formation of the Russiagate conspiracy theory, which in turn manufactured support for the many, many new cold war escalations that the Trump administration has implemented against Russia. Opposing détente and increasing US hawkishness toward Russia has been a primary aim of neoconservatism since its inception.

“Neocon rag celebrates the most heinous single act of state terrorism in world history,” tweeted journalist Dan Cohen in response to the Free Beacon's post. “They deserve just as much derision as Nazis.”


Cohen is absolutely correct. In a healthy world, members of the ideology which promotes endless acts of military slaughter and glorifies the pointless nuclear incineration of innocent human beings would be treated with the same ubiquitous social revulsion as Nazis, child rapists and serial killers. They are just as evil, and, in today’s world, they actually pose a far greater threat. We will know that we are living in a healthy society when neocons and their affiliates are treated just like any other kind of murderous monster.

The best way to get around the internet censors and make sure you see the stuff I publish is to subscribe to the mailing list for my website, which will get you an email notification for everything I publish. My work is entirely reader-supported, so if you enjoyed this piece please consider sharing it around, liking me on Facebook, following my antics on Twitter, throwing some money into my hat on Patreon or Paypal, purchasing some of my sweet merchandise, buying my new book Rogue Nation: Psychonautical Adventures With Caitlin Johnstone, or my previous book Woke: A Field Guide for Utopia Preppers. For more info on who I am, where I stand, and what I’m trying to do with this platform, click here. Everyone, racist platforms excluded, has my permission to republish or use any part of this work (or anything else I’ve written) in any way they like free of charge.