The Reagan administration in 1982 coerced National Public Radio (NPR) to cover more favorably the US terrorist war then being waged against Nicaragua.

As Greg Grandin writes, Otto Reich, head of the administration’s Orwellian propaganda outfit known as the Office of Public Diplomacy, informed the public network that his office had contracted “a special consultant service [to listen] to all NPR programs” on Central America. Dependent on state funding, NPR promptly buckled under pressure, reassigning reporters viewed as “too easy on the Sandinistas,” and hiring conservative pundit Linda Chavez to provide “balance.” 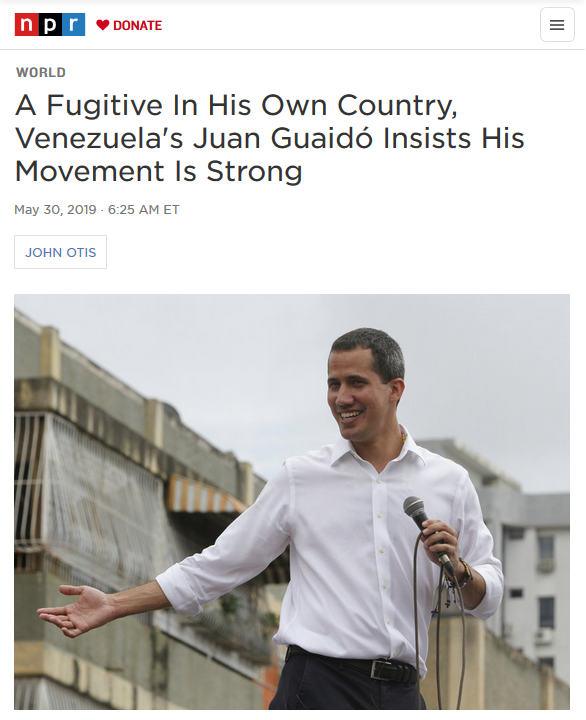 NPR (5/30/19) says Juan Guaidó is “recognized by dozens of countries as Venezuela’s rightful head of state”—without mentioning that he was unknown to most Venezuelans when he proclaimed himself president.

NPR published an exclusive interview on May 30 with Venezuelan opposition leader Juan Guaidó, in which the self-proclaimed “interim president” was described as “a fugitive in his own country” confronting “authoritarian President Nicolás Maduro.”

The article went on to state that Venezuela “is suffering from hyperinflation, power outages, and chronic shortages of food, medicine and fuel.”

Strangely absent is any reference to illegal US sanctions, which have played an indisputable role in severely exacerbating the country’s crisis to the detriment of ordinary Venezuelans.

Additionally, the exclusion of Chavista voices is likewise endemic to NPR’s coverage of Venezuela, in gross violation of the outlet’s own ethics handbook.


When it comes to covering Venezuela’s elected Maduro government, it appears that NPR’s favorite adjective is “authoritarian.”

The public news network has referred to President Nicolás Maduro and his administration as “authoritarian” and/or a “regime” no less than 26 times since December, with no explanation why the Venezuelan government merits an editorialized moniker that ideologically justifies US intervention.

Moreover, when the fact that Maduro was reelected last year is mentioned, it is generally accompanied by a vague reference to “fraud.”

Usually no effort is made to elaborate on the fraud allegations—which the opposition never presented substantive public evidence to support—and when additional context is provided, it generally amounts to a reference to NPR’s mendacious 2018 election reporting.

At the time, NPR’s Phillip Reeves (5/20/18) denied the legitimacy of the vote by claiming, “Nicolás Maduro controls most of the media, the electoral authorities.” He ignored the fact that most Venezuelan media is private and pro-opposition, while the National Electoral Council is headed by the same officials who oversaw the opposition’s 2015 landslide parliamentary victory. 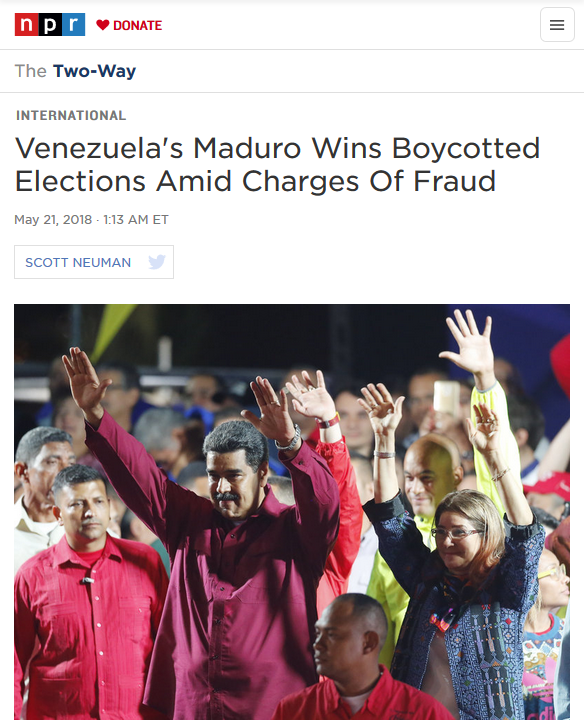 NPR‘s headlined claim of “fraud” (5/21/18) rests heavily on the unsubstantiated assertions of “many independent observers.” The 6 million votes received by President Nicolás Maduro are in line with the support found for the government in independent polling.

Similarly, NPR’s Scott Neuman (5/21/18) wrote, “The opposition’s most popular leaders…were barred from running,” in reference to Leopoldo López and Henrique Capriles. The claim that these were the most popular potential opposition candidates is false: Datanalisis, the international corporate media’s most widely cited pollster, at the time had opposition presidential candidate Henri Falcon polling significantly above Capriles and López, at around 38%, in May 2018.

By comparison, a Pew Research study conducted later in the year amid accelerating hyperinflation found that 33% of Venezuelans “trust their government,” roughly equivalent to the 31% of the electorate that voted for Maduro on May 20, 2018.

NPR suggests that López and Capriles were barred for extralegal political reasons, neglecting to mention that López was convicted of inciting violence during the 2014 protests aimed at ousting the government, while Capriles was previously indicted for allowing opposition supporters to lay siege to the Cuban Embassy in 2002, and was later barred from office by the comptroller general over alleged corruption, for which he is also being investigated by the opposition.

Moreover, NPR and other mainstream outlets do not regularly refer to Brazil’s 2018 presidential election as “fraud-marred,” despite the country’s most popular politician, Lula da Silva, having been jailed and banned from running in a baseless, politically motivated court case, as Glenn Greenwald has exposed. Lula did not participate in violent foreign-backed coup attempts, unlike López and Capriles, both of whom were active in the 2002 coup against Chavez.

This myth of electoral fraud embraced by NPR was “made in USA,” when the Trump administration threw its weight behind an opposition boycott, preemptively refusing to recognize the vote and threatening to sanction the independent opposition candidate. But no amount of US interference invalidates an election in the view of Western journalists, as the classic example of Nicaragua’s 1990 election of Violeta Chamorro illustrates. In 2018—as in Venezuela’s 2013 presidential election, which was recognized by every government in the world except the Obama administration—it would seem that a vote is only “free and fair” when Washington’s candidate is elected.

This systematic bias ridicules NPR’s professed commitment to “stick to facts and to language that is clear, compelling and neutral,” while the omissions and blatant factual distortions compromise its accuracy and completeness.

Lying by omission: US sanctions

"Errors of omission and partial truths can inflict great damage on our credibility, and stories delivered without the context to fully understand them are incomplete."


While NPR has made scattered but repeated reference to US economic sanctions—predominately in the wake of the Trump administration’s January 28 oil embargo—nowhere does NPR bring up the fact that the unilateral measures are illegal under both US and international law, while only in a few cases does the public encounter a passing acknowledgement of the negative humanitarian toll. In the vast majority of stories, NPR rarely dedicates more than one line to US economic sanctions, which are routinely presented as “aimed squarely at [the] Venezuelan government” (8/25/17), ignoring the repercussions for ordinary Venezuelans. In no case does NPR present the public with perspectives opposing US sanctions as a matter of principle. 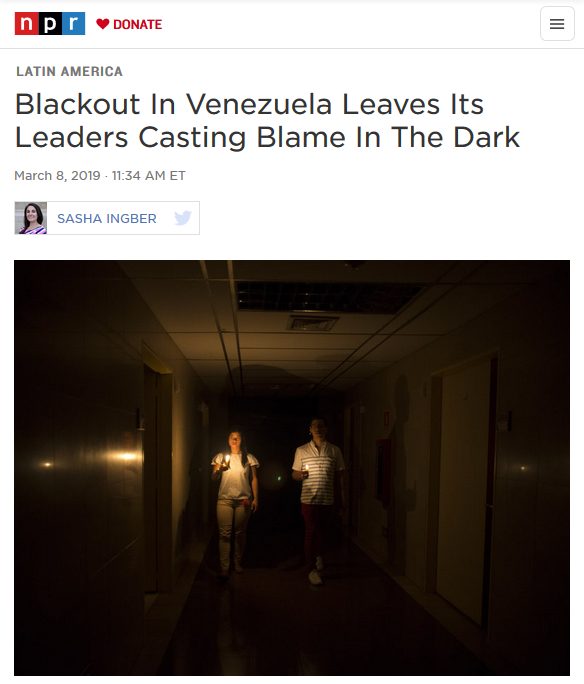 An NPR report (3/8/19) concludes with Sen. Marco Rubio mocking the idea that the US could be behind electrical grid failures in Venezuela—though the US openly boasts of conducting cyber warfare against electrical systems in official enemy nations (New York Times, 6/15/19).

In a report on the nationwide March blackouts, NPR’s Sasha Ingber (3/8/19) manages to avoid naming sanctions as one of the key factors behind the outages, relegating them to an insignificant tertiary element “likely to increase the country’s economic plight,” but in no way responsible for Venezuela’s dramatically worsening crisis since Trump imposed direct economic sanctions in August 2017.

In fact, according to economist Francisco Rodríguez of Torino Capital, sanctions not only prevented Venezuela from paying foreign companies for vital maintenance work on its electrical grid, but also barred it from importing sufficient diesel fuel needed to power thermoelectric generators.

The pattern is repeated in NPR’s coverage of Venezuela’s economic crisis through the lens of out-migration (6/21/19, 6/7/19), school truancy (6/29/19) or alleged “intimidation” of private charities (6/11/19). Here sanctions—which are set to cause Venezuela’s economy to contract by 37% this year—are either completely ignored, or their devastating social impact is presented as a dubious “claim” by Caracas officials.

Like virtually every other mainstream international outlet (FAIR.org, 6/26/19), NPR has yet to cite—let alone actually report on—a recent study by acclaimed economists Mark Weisbrot and Jeffrey Sachs, which found US sanctions on Venezuela to constitute a form of “collective punishment” responsible for as many as 40,000 deaths through 2018. This omission is not surprising, given that NPR had previously joined major corporate outlets in systematically censoring the impact of Trump’s August 2017 financial sanctions, which cost the country at least $6 billion in lost oil revenue over the subsequent twelve months.

Exhibit A of this erasure is an article headlined “Venezuela’s Health System Ready to Collapse Amid Economic Crisis” (NPR, 2/1/19), in which Samantha Raphelson treats sanctions as a conspiracy theory on which “Maduro blames the country’s growing crisis,” despite the fact that US financial blacklisting, as well as plummeting revenue due to sanctions, hampered Caracas’ ability to import vital medicine and medical equipment. At this point, NPR can easily cite the US government itself as a source for the claim that Washington is exacerbating the Venezuelan crisis, with the State Department publishing (and subsequently hiding) a fact sheet that boasted that “key outcomes” of US efforts included the freezing of “roughly $3.2 billion of Venezuela’s overseas” assets, and a 36% reduction in Venezuelan oil production in February/March 2019 (Venezuelanalysis, 5/6/19). 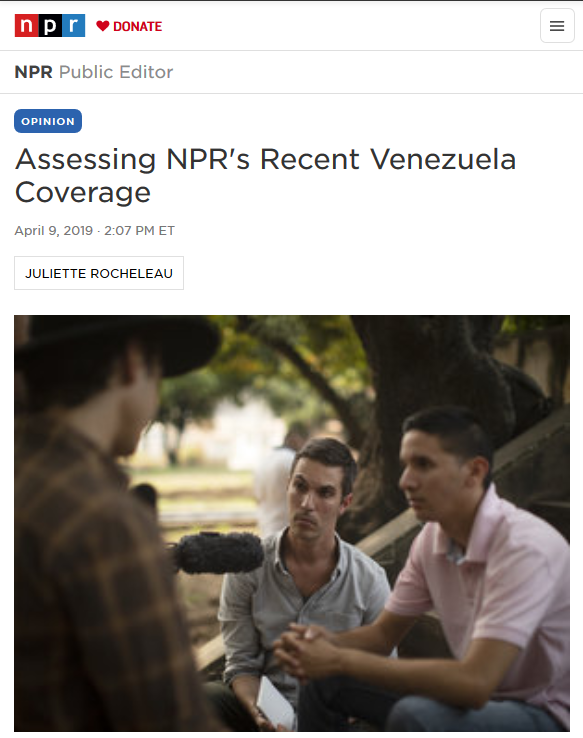 In answer to the question, “How can reporting of current news also take account of decades of historical context surrounding US intervention in Latin America? NPR public editor Juliette Rocheleau (4/9/19) concludes: “It depends.”

In an assessment of NPR’s Venezuela coverage (4/9/19), the network’s public editor, Juliette Rocheleau, recognizes an “imbalance” in which “opposition voices have outnumbered those of Maduro supporters in NPR‘s reporting.” The slant is fairly overwhelming, since Rocheleau can only name four occasions that NPR interviewed government supporters.

"We want to plunge the depths of the pro-Maduro supporters.” But Dobson said NPR‘s responsibility to keep its journalists and sources safe is the top priority, and reporting safely from Venezuela is extremely difficult: Venezuela ranks 143 out of 180 countries in press freedom, with journalists risking violence at the hands of the state and some of its supporters."


This is a self-serving canard. Various independent outlets such as Venezuelanalysis (where I’m an editor), the Real News and Grayzone—all with far fewer resources than NPR—have frequently interviewed Chavistas from various political walks of life. The notion that Chavista “violence” keeps Western reporters at bay is rather fantastical, given that it’s opposition demonstrations, not pro-government ones, that have been the site of mob lynchings and attacks on journalists, including those from pro-opposition private outlets. Even if we take at face value NPR’s safety concerns, this should not stop the network from interviewing experts opposed to US regime change in Venezuela, such as Noam Chomsky, Mark Weisbrot, Jeffrey Sachs, Alfred De Zayas and Miguel Tinker Salas, whose voices are conspicuously absent, despite making regular appearances in independent progressive media.

Perhaps a more realistic explanation for NPR’s admitted “imbalance” is professional class bias. It seems that Western journalists bear an instinctual aversion to poor black and brown people organizing to defy the US Empire. Their natural sympathies appear to lie with lighter-skinned (preferably English-speaking) professionals or members of the elite who make them feel more comfortable. Despite their “progressive” reputation, NPR journalists are little different than their mainstream corporate counterparts when it comes to repeating Washington and the opposition’s anti-Chavista propaganda, in flagrant breach of their own ethics.

You can send a message to NPR‘s public editor here (or via Twitter: @NPRpubliceditor). Please remember that respectful communication is the most effective. Feel free to leave a copy of your message in the comments thread of this post.
Posted by Gorilla Radio Blog at Monday, August 05, 2019