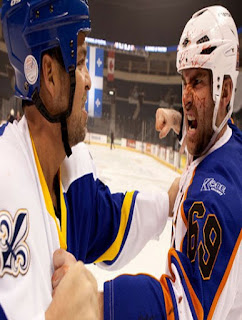 On Tuesday two RCMP agents came to my house. Two large men in suits asked for me and when my partner said I wasn’t there they asked who she was.

Why didn’t they email or call me to talk or set up a meeting? If they have my address, the RCMP certainly has my email, Facebook, Skype or phone number.

My partner asked for their badges, took their photo and asked them to leave the stairway they had entered.

They returned the next day. Not wanting to interact, my partner ignored them.


They rang the doorbell multiple times over many minutes. After she saw people at the restaurant across the street wondering what was going on – from the ground you can see into the front of our place – she poked her head down the stairway where they caught her eye. They asked why I didn’t call even though they didn’t leave a number.


The visits are a transparent effort to intimidate me from directly challenging the government’s pro-corporate and pro-empire international policies.


The day before their first visit to my house two RCMP officers physically removed me from a press conference when I asked Transportation Minister Marc Garneau about Canadian arm sales to Saudi Arabia. When I sat down at an event that was already underway an officer took the seat next to me. When I began to ask a question at the end of the press conference he used the cover of private property to try to block me. 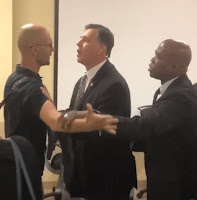 On this video one can see the RCMP agent asking the building security twice if I’m welcome in the space. Deferring to police, the security guard tells him I’m not welcome. The RCMP agent, who doesn’t have the right to remove me from the room without a directive, then uses the authority derived from a representative of the building to physically eject me and threaten arrest.

Last Wednesday lawyer Dimitri Lascaris and I were blocked from a talk by the prime minister at the Bonaventure Hotel in a similar way. In my case an RCMP agent called out my name as I entered the hotel and then accompanied me in the elevator, through a long lobby and down an escalator to ‘introduce’ me to hotel security. The representative of the hotel then said I wasn’t welcome, which gave the officer the legal authority to ask me to leave. Lascaris details the incident in “The RCMP’s Speech Police Block Yves Engler and Me From Attending A Speech By Justin Trudeau.”

After starting to write this story, I was targeted by the RCMP for removal from a press conference by Justice Minister David Lametti. On Thursday, a Concordia University security guard, who I walked past to enter the room, came up to me 15 minutes later and asked for my press credentials. There were two dozen people in the room who didn’t have press credentials and the release for the event said nothing about needing them. The RCMP agent admitted that he asked Concordia security to approach me. He also said he was only there for the physical — not political — protection of the minister, but refused my suggestion that he and the Concordia security agents sit next/in front of me to ensure the minister’s physical safety.


Here is the question I planned to ask the Justice Minister:

“Minister Lametti you have an important decision to make in the coming days about whether you believe in international law and consumer rights. As you know the Federal Court recently ruled against your government’s decision to allow wines produced on illegal settlements in the West Bank to be labeled as ‘Products of Israel’.

“While anti-Palestinian groups are pressuring your government to appeal the decision, the NDP and Greens want you to stop wasting taxpayer money on this anti-Palestinian agenda. Will you commit to accepting the court’s sensible ruling that respects consumers, international law and Palestinian rights?”


Over the past six months Lascaris, I and other members of Solidarité Québec-Haiti and Mouvement Québécois pour la Paix have interrupted a dozen speeches/press conferences by Liberal ministers/prime minister to question their anti-Palestinian positions, efforts to topple Venezuela’s government, support for a corrupt, repressive and illegitimate Haitian president, etc.

We are open about our actions and intentions, as you can read in this commentary. We film the interruptions and post them online. (If any illegal act were committed the RCMP could easily find all they need to charge me on my Facebook page!) The interruptions usually last no more than a couple of minutes. No politician has been stopped from speaking, let alone threatened or touched.


Did the RCMP receive a directive from a minister to put a stop to our challenging their policies?


The federal election is on the horizon and government officials will increasingly be in public. The Trudeau government is playing up its ‘progressive’ credentials, but the interventions highlight how on one international policy after another the Liberals have sided with corporations and empire.

From the government’s perspective, having their PR announcements disrupted is a headache, but that’s democracy. The right to protest, to question, to challenge policies outweighs politicians’ comfort.
Posted by Gorilla Radio Blog at Saturday, August 31, 2019

Skripal in Prison: The Truth About the Infamous Poisoning in an English Country Square

SKRIPAL IN PRISON – THE FIRST BOOK TO REPORT THE TRUTH by John Helmer - Dances with Bears @ bears_with February 13, 2020...