Germany, US threaten war amid Russia-Turkey summit on Syria

As Turkish President Recep Tayyip Erdogan flew to the Russian resort of Sochi for a summit yesterday with President Vladimir Putin on the war in Syria, Berlin and Washington issued bloodcurdling threats of all-out war in the Middle East. 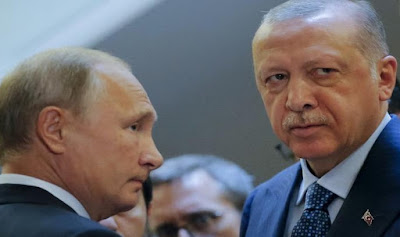 In Washington, where a bitter debate is unfolding over Trump’s Middle East policy, Secretary of State Mike Pompeo threatened war with Turkey, a NATO ally and major regional military power. Asked for his reaction to the Turkish military offensive against the Kurds, Pompeo replied:

“We prefer peace to war. But in the event that kinetic action or military action is needed, you should know that President Trump is fully prepared to undertake that action.”


The most aggressive proposal, however, came from Berlin, where Defense Minister Annegret Kramp-Karrenbauer called for a massive European Union (EU) force to occupy northern Syria, supposedly working in coordination with Russia and Turkey.

“My proposal is that we would set up an internationally controlled safe zone, involving Turkey and Russia,” she said.

“I believe that would be a strong political and diplomatic response of the European powers in NATO.”

Tens of thousands of troops from Germany, Britain, France and other EU states would be mobilized under this proposal, in the largest EU overseas occupation force in decades. Roderich Kiesewetter, a former German army staff officer serving as a foreign policy specialist for Kramp-Karrenbauer’s Christian-Democratic Union (CDU), estimated that 30,000 to 40,000 troops would be involved.

Kramp-Karrenbauer is to argue for her proposal at tomorrow’s NATO defense ministers meeting in Brussels.

This proposal testifies to the vast shift to the right in official European politics over the last decade. For the first time since the fall of the Nazis in 1945, Berlin is proposing an international military operation; previously, it supported wars launched by Washington, Paris or other powers. Since Berlin began to remilitarize its foreign policy, however, shortly after Washington backed off from bombing Syria in 2013, politicians and right-wing extremist academics have ceaselessly promoted militarism to try to overcome deeply rooted popular opposition.

Amid a military buildup across Europe, France and Sweden have announced timelines for restoring the draft. Collectively, the EU powers have pledged to pour hundreds of billions of euros into their militaries over the coming years. Kramp-Karrenbauer’s remarks show that this buildup aims not to make Europe safe for democracy against foreign invasion, but to prepare the EU powers to wage their own neocolonial wars in oil-rich regions key to their strategic interests.

Imperialist circles in both America and Europe are outraged at the military and financial advantages that could accrue to Russia, Iran and China from their defeat in Syria. One recent essay from the US Brookings Institution think tank complained:

“The prospect of lucrative reconstruction deals has triggered a deluge of interest from governments and firms looking to profit from Syria’s devastation. The regime’s closest allies, Russia and Iran, have been the most prominent beneficiaries of the Syria reconstruction gold rush, with China not far behind.”


As a trade war escalates between Washington and the EU, with threats of billions of dollars in trade war tariffs on both sides, US-EU geostrategic divisions are also widening. However, the EU powers also view the defeat of NATO’s Islamist and Kurdish proxies in Syria, and the victory of the Russian-backed Syrian regime of President Bashar al-Assad, as a threat to their strategic interests and world position. As Berlin seeks to advance its own independent interests, it does so—for now—under the increasingly thin and unsteady cover of the NATO alliance.

In an article titled “What the Syrian debacle means for the Middle East and Europe,” German news magazine Der Spiegel warned:

“Now that the U.S. has withdrawn from northern Syria, a trio of autocrats is dividing the country up between them. … Rarely has a single act in global politics triggered such a rapid chain of events as the U.S. pullout from Syria last week.”

“A changing of the guard is taking place in Syria. The West has surrendered. The Europeans and the Americans have repeatedly condemned the atrocities in Syria, but they have done little to prevent them. Meanwhile, the despots—Assad, Erdogan and Putin—are emerging as the victors. And the consequences will be felt far beyond the Middle East.”


EU denunciations of Middle East despots reek of hypocrisy. The plain fact is that the imperialist powers currently face a humiliating defeat in the Middle East, where they bear responsibility for decades of wars launched on the basis of lies and provocations, like the claim that the Iraqi regime had weapons of mass destruction used to justify the 2003 invasion of Iraq.

A general retreat of NATO forces is now underway across Syria and Iraq, where Washington and its European allies have been involved in bloody wars of plunder ever since NATO led the 1991 Gulf War against Iraq. Taken collectively, these wars killed or wounded millions, and turned tens of millions of people into refugees. The hasty retreat of the remaining US troops from northern Syria is now leading to an outpouring of protests.

The population of Syrian villages through which convoys of US armored vehicles passed pelted them with tomatoes or eggs, or allegedly shouted slogans denouncing them for betraying Washington’s Kurdish allies. After they crossed the border into Iraq, these convoys were met with further protests and calls in English of “Fuck off.”

A further blow to the US military position in the Middle East came from the neocolonial puppet regime set up by the 2003 US war in Iraq. Now more closely aligned with Iran, it is reeling under a scandal over its bloody repression of mass protests at the beginning of the month, in which Iraqi troops killed 121 people—shooting them in the head and torso. This comes also amid a wave of ongoing mass protests in Lebanon.

Suddenly, yesterday, the Iraqi regime countermanded US Defense Secretary Mark Esper’s claim that US troops leaving Syria would remain in Iraq to fight terrorist groups. The Iraqi army issued a statement that US forces only have the permission to transit through Iraq and leave, not to remain there.

Berlin’s proposal for EU military occupation of northern Syria is, no less than Pompeo’s open threat of all-out war with Turkey, a call for a vast escalation of imperialist violence in the Middle East. It involves the danger of a direct military confrontation with Russia, a major nuclear-armed power whose forces are allied to the Syrian government. It would inevitably collide not only with military opposition in the region, but with growing protests and anti-imperialist sentiment among Middle East workers and youth.

While Kramp-Karrenbauer proposed to coordinate her deployment with the Russian and Turkish officials, there was every indication yesterday that Moscow opposed it. Asked about Berlin’s proposal, Kremlin spokesman Dmitri Peskov evaded the issue, implying that Moscow had not even considered the possibility at all.

“It is a new initiative, there is no clear position on it. One would have to look at it,” he said.


However, German state broadcaster Deutsche Welle interviewed Ruslan Mamedov of the Russian Council for Foreign Policy think-tank, who bluntly declared: “The official Russian position is that all foreign troops must leave Syria. I do not believe any sort of safe zone under the joint control of EU countries and Russia will develop.”

As for Erdogan, he participated in a seven-hour meeting with Putin in Sochi aimed at eliminating the remaining NATO-backed militias in Syria and avoiding the outbreak of war between Turkish and Syrian army units operating in close proximity along their common border.

The resulting agreement, subsequently approved by Assad after a telephone conversation with Putin, divides the Syrian-Turkish border into zones patrolled by Turkish troops, along which military action against Kurdish fighters may continue if they do not leave, and an area jointly held by Syrian border guards and Russian military police.

Alleged Islamic State (IS) fighters are to stay in prison camps where they were kept, in horrific conditions, by NATO-backed Kurdish troops. Finally, it reaffirms the 1988 Adana accord committing Syria not to host forces of the Kurdistan Workers Party (PKK), against which Turkey has waged a decades-long war.

Marking Moscow’s distance from Washington and its European allies who had troops in Syria, Russian Foreign Minister Sergei Lavrov declared:

“We do not particularly look at the United States and its stance. That stance is quite variable and contradictory, and of course, the coalition led by the United States is in Syria illegally. That is well known.”