Bolivian Mutineer Áñez: The Face to Launch a Thousand Deaths

Bolivia has a new US-backed puppet leader, and the Western media can hardly conceal their adulation.

Jeanine Anez receiving the presidential sash from a
representative of the Bolivian military (photo: EFE). 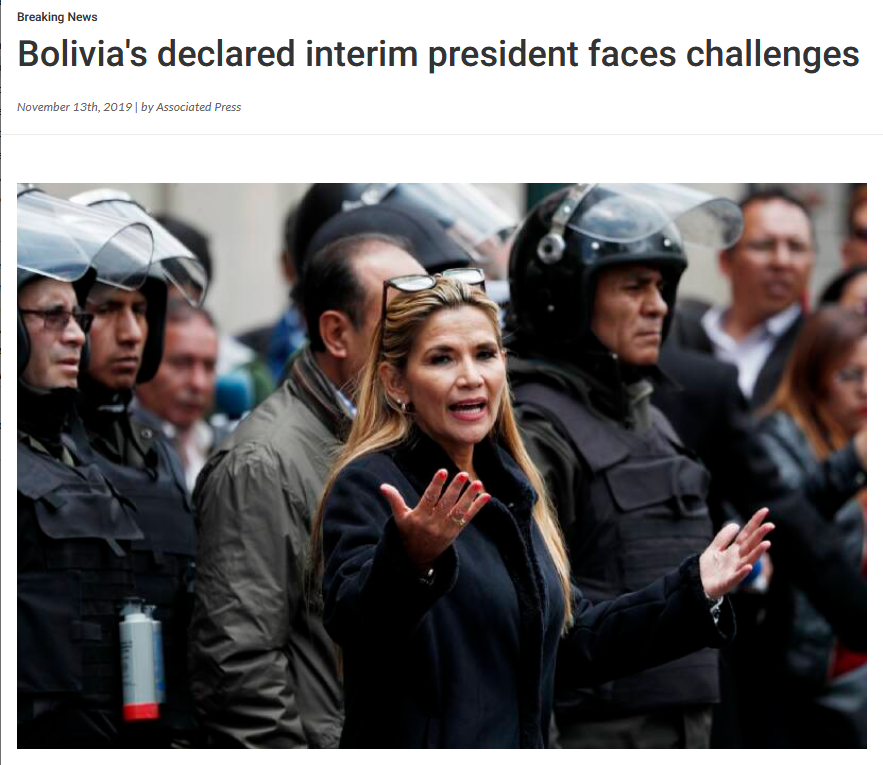 Jeanine Áñez declared herself “interim president” in a near-empty Senate chamber on November 12, proceeding to don the presidential sash with the assistance of uniformed soldiers.

Despite a lack of quorum rendering the move nakedly unconstitutional, Áñez was immediately recognized by the Trump administration and 10 Downing Street.

Tuesday’s scene seemed like a parody of January’s events in Venezuela, in which a virtually unknown lawmaker, invoking highly dubious constitutional arguments, proclaimed himself “interim president” to the delight of Washington.

For all the supposed threat Trump represents and the enthusiasm sparked by his possible impeachment, Western media continue to march lockstep behind his administration’s coups in Latin America. 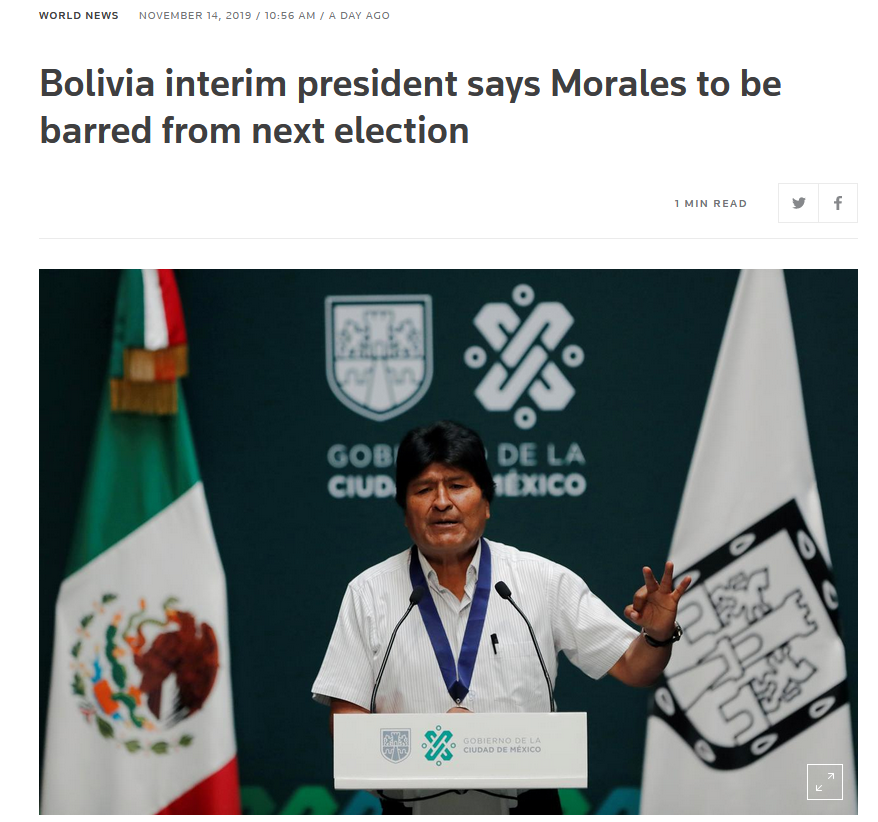 For Reuters (11/14/19), the self-proclaimed head of state is the “Bolivia interim president,” whereas the elected president is just “Morales.”

Meanwhile, corporate outlets have euphemistically labeled Áñez as “conservative” (Guardian, 10/13/19; New York Times, 10/12/19; Reuters, 10/13/19), eliding any mention of her far-right, virulently anti-indigenous politics. Áñez is a member of the right-wing Democratic Social Movement from the eastern lowland region of Santa Cruz, historically a bastion of separatist groups and home to some of the most powerful Bolivian oligarchic families. She has a history of making glaringly racist remarks, tweeting in 2013 (6/20/13) that the “Aymara New Year,” an indigenous holiday, was “Satanic”: “There is no replacement for God.” Just days before seizing power, she questioned on Twitter (11/6/19) whether some people being interviewed could really be Indigenous—because they were wearing shoes. For all of liberal journalists’ virtue-signaling concerning minority rights in the global North, the silence is deafening when it comes to blatant racism from pro-US elites in Latin America.

Áñez has another scandal brewing, which has yet to be reported in the English-speaking press: Her nephew was arrested for drug trafficking in 2017. According to EFE (10/20/17), Carlos Andrés Áñez Dorado was arrested in Brazil on October 15, 2017, in possession of 480 kilograms of cocaine—more than half a ton.

Given the extensive coverage corporate journalists gave to the arrest and conviction of Venezuelan first lady Cilia Flores’ “narco-nephews” in 2015–17 (e.g. Business Insider, 10/31/16; Miami Herald, 12/13/17; Daily Beast, 12/15/17), one could expect equally damning exposés in the case of Áñez. Readers shouldn’t hold their breath.

In addition to whitewashing Áñez, corporate journalists have sought to sanitize the image of the figure widely considered to be the real force behind the coup: Christian fundamentalist multimillionaire Luis Fernando Camacho.

Camacho is quite literally a fascist who got his political start in the sieg-heiling Santa Cruz Youth Union, an ultra-right paramilitary outfit that was instrumental in the Santa Cruz oligarchy’s 2008 US-backed secessionist plot which ultimately failed.

Also notoriously absent from mainstream coverage of the Bolivia coup are references to the fascist tactics employed by the opposition. Images and reports on social media showed MAS leaders attacked by mobs, tied to trees, their houses set on fire and several being forced to resign by opposition violence. Instead, corporate journalists innocuously described the increasingly violent right-wing mobilizations as “mass protests” (BBC, 10/31/19), “dissent” (AP, 11/8/19) and “civil disobedience” (New York Times, 10/31/19).

The right-wing violence was framed as “clashes” (DW, 11/8/19; France 24, 11/8/19) over “controversial” or “disputed” electoral results (Washington Post, 11/07/19; BBC, 11/7/19) enabling the US-backed opposition to don the mantle of pro-democracy protesters. To bolster this “fraud” narrative, Western journalists uncritically repeat the US-financed OAS’ claims of “irregularities,” and largely ignore a CEPR report that found no evidence discrediting the results.

Once Evo Morales was forced to resign, the switch was immediately flipped. State security forces, which had stepped aside to let Camacho’s fascist gangs wreak havoc and attack opponents, were now deployed to crush the inevitable resistance from indigenous MAS supporters. But now the media could resort to their tried and tested technique of criminalizing the anti-coup protests as “violence by looters or by Mr. Morales’ supporters” (New York Times, 11/12/19), just like was done in the case of anti-neoliberal rebellions in Chile and Ecuador (FAIR.org, 10/23/19). In some cases, journalists seemed to be preemptively justifying repression, for example writing that “violence erupted” after Morales’ resignation (Financial Times, 11/11/19), or that security forces were being deployed to “quell violence” (Reuters, 11/11/19). AP (11/13/19) asserted, perhaps wishfully, that “a sense of normalcy returned to the capital on Wednesday.”

Backed by Washington, the coup that the Western media deny is a coup (FAIR.org, 11/11/19) appears successful, at least for the time being. However, as in the short-lived 2002 coup in Venezuela, the media blackout and savage repression have not stopped multitudes of Bolivians from taking to the streets to restore democracy. Only time will tell if the pueblo will triumph.
Posted by Gorilla Radio Blog at Saturday, November 16, 2019