Making the Call on JIT's MH17 Airliner Shootdown: No Calls or Evidence, But Allegations Remain

NATO INTELLIGENCE DISASTER – NEW TELEPHONE INTERCEPTION TAPES REVEAL THERE WERE NO COMMUNICATIONS BETWEEN UKRAINE AND KREMLIN AFTER MH17 CRASH – NO DUTCH EVIDENCE, NO RUSSIAN CRIME

The North Atlantic Treaty Organization (NATO) and the Dutch Government have released highly sensitive intelligence confirming what is said to be telephone communications between Russian military commanders, the Russian Defence Ministry, and at least one Kremlin staff man in their communications with the Donetsk People’s Republic (DPR).

Moscow - The purported telephone interceptions date from June through August 2014. Tape-recordings and text partially translating and interpreting what was said were presented publicly on November 14 by the Dutch-directed prosecution of crimes committed when Malaysia Airlines Flight MH17 was destroyed over eastern Ukraine on July 17, 2014.

In the release, the Joint Investigation Team (JIT), run by Dutch and Australian policemen, announced it “is looking for information on the individuals within the military and administrative hierarchy who enabled the shooting down of MH17 in Eastern Ukraine using a BUK TELAR.” The JIT has already announced its conclusion that the Russian Government was responsible and criminally culpable in the shoot-down of the aircraft. The Malaysian Government, which is a member of the JIT and owner-operator of the aircraft in which 43 Malaysians were killed, has refused to endorse the allegations first announced by the Dutch on June 19.

In fact, as lawyers and analysts of the MH17 case now realize, last week’s disclosure of the top-secret interceptions reveals the JIT has no tape evidence of communications with Moscow on July 17 and 18, 2014, in the immediate aftermath of the aircraft crash. Alternatively, if the JIT has this evidence but is keeping it secret, the latest interception records demonstrate what the JIT cannot prove.


In the period when the Russian involvement is most likely to have been direct, as the Dutch allege, and communications ought to have been intense over many hours, the JIT, and its NATO and US sources, have nothing to show.

This means the opposite of the JIT’s conclusion. The latest evidence proves what the JIT doesn’t have.

The JIT opens its new release with an appeal for witnesses. “The JIT is looking for information on the individuals within the military and administrative hierarchy who enabled the shooting down of MH17 in Eastern Ukraine using a BUK TELAR.” The term “enabled” implies Russian government culpability in the destruction of the aircraft through the chain of command running from the Kremlin to the battlefield in eastern Ukraine.

Recent analysis of witness statements and other information revealed that Russian influence on the DPR went beyond military support and that the ties between Russian officials and DPR-leaders appear closer. The intensity of Russian influence is relevant to investigating further individuals involved in the downing of MH17. That is why today the JIT releases this new appeal for witnesses.”

Intensity is the term the JIT has introduced as evidence of the conduct of “individuals involved in the downing of MH17.” But the evidence of the tapes presented shows no telephone intercept for July 17, in the afternoon and evening hours after the crash, when the intensity of communication between the alleged perpetrators and their alleged commanders, up and down the purported chain of command, would have been more intense than at any other time.

Instead, from the evening of July 18, this intercept has been presented by the JIT:

What is missing in this exchange between soldiers on the scene is any reference to the one battlefield event both men ought to have known about, if the Dutch narrative is the truth. The JIT doesn’t interpret what is missing. Instead, it claims:

“Intercepted phone calls also seem [sic] to show the involvement of Russian security services, working side by side in directing the DPR. For example, on 18 July 2014, two DPR-members are discussing that they are both receiving their orders from Moscow; one from the FSB and the other from the GRU.”

“Recent analysis of witness statements and other information revealed that Russian influence on the DPR went beyond military support and that the ties between Russian officials and DPR-leaders appear closer.”


This is political speculation, not forensic evidence.

For analysis of the JIT’s June round of claims, read this. The JIT’s record for passing off fabricated telephone recordings as evidence for its charges has been tested by OG IT Forensic Services, a Malaysian firm specializing in forensic analysis of audio, video and digital materials for court proceedings. This has confirmed faking by JIT in the tapes released in June; the 143-page technical report can be read here. For additional evidence of tampering, fabrication and lying by the JIT, click to open.

In the new round, the JIT has gone a step further, listing the questions it is asking from witnesses who haven’t testified, and who have yet to materialize. Read carefully for what they reveal about the prosecutors asking them, these questions are proof of what the JIT doesn’t know. 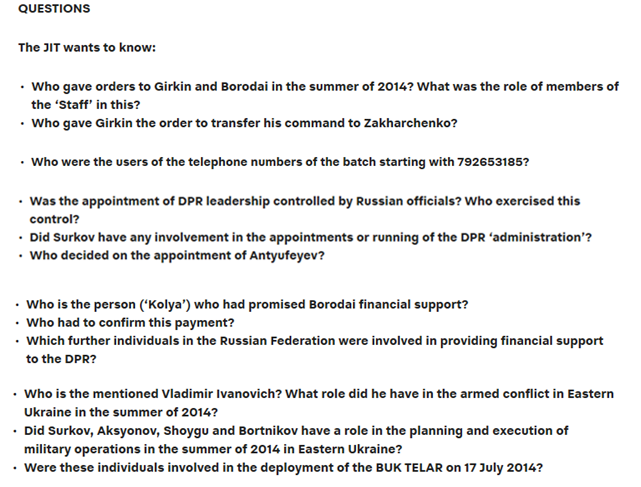 According to these JIT disclosures, “the purpose of the criminal investigation is to establish the facts, identify those responsible for the crash and to collect evidence which can be used in every court, in any country.” In law and in fact, the evidence presented by the JIT cannot be admitted as evidence in any court in any country. [*]

This analysis of the newly released telephone tapes by the Joint Investigation Team has benefitted from a fresh assessment by my collaborator, Max van der Werff. He comments:

“Not even in one tap is there any mention of MH17, Boeing, BUK, or the crash. Wouldn't you expect soldiers panicking and round-the-clock consultations between the rebels and the centre, if that's where the orders came from, as the JIT has already concluded? To me the pattern is clear. After five years the JIT has still not presented any solid evidence.”