The Little Poison That Couldn't: Is It Time to Retire Novichok?

It was the best of times, it was the worst of times – this is how Charles Dickens opened his story of regime change in Paris during the French revolution. Also for Alexei Navalny (lead image) and his roommate in Tomsk on the evening of August 19, Maria Pevchikh of London. 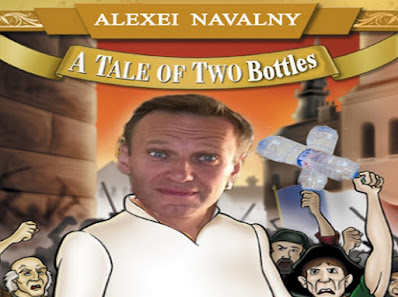 For incredulity, the new film by Navalny and Pevchikh is not quite up to the Dickens standard. Now presented to the world as evidence of a murder plot, their tale of the two bottles invites an epoch-load of incredulity.

In the version of the film which the Murdoch press has published in London, along with a commentary by Dominic Raab, the British Foreign Secretary, the bare feet, shaven legs, and yellow slip of one woman, and the voice of another woman, have been removed.

Woman 1: “While you don’t have an official permission, I can’t give you anything.”
Woman 2: “We don’t need a permission to take the empty bottles.”
Woman 1: “If you want to take any bottles, you need the permission of the police.”

This dramatic dialogue reveals that the blue-capped Saint Springs water bottle shown in the film – actually, three bottles are recorded, two on one side of the bed, one on the other side; all of them empty – were not allowed out of the Tomsk hotel room on police orders.

The reference by the hotel employee to the police orders indicates that the time at which the bottles appear on film – 11:45 AM Tomsk time — was about six hours after Navalny had left the room — if it was his hotel room, not Pevchikh’s – and up to twelve hours since he or she, or the two of them, had drunk from the bottles during the preceding night. If the bottles were contaminated with Novichok, the elapse of time makes the episode the slowest motion nerve agent in assassination history.

The time on the Tomsk clock means that it was 10:45 in Omsk; by then Navalny had been in Omsk Hospital for almost an hour. From the remarks of the hotel maid on the soundtrack, it is clear the police in Tomsk had already been alerted, although there was no crime-scene guard or control at the hotel room. Bagging and removing the bottles from the room, as the film shows, was interference with a crime scene. The film is proof that the “full and transparent investigation” which Raab and his German counterpart, Foreign Minister Heiko Maas, have publicly urged on the Russian government, is impossible because the crime scene has been tampered with and evidence removed.

As forensic evidence on its own, the film of the bottles, released 28 days after the filming, is also proof that the chain of custody connecting the bottles in the film; the evidence which appeared in Berlin on August 22 with Navalny; and the bottle evidence which the German Foreign Ministry sent to the German Army’s chemical warfare laboratory in Munich, is Pevchikh. Whether she is the bare-footed, shaven-legged person wearing a yellow slip, as shown in the Russian film, is uncertain.

Pevchikh was in the room at the time, according to the account published by Andrei Zakharov and Roman Badinin in Russian Reporter at the same time as the Instagram video began to be broadcast. “Maria Pevchikh took [the bottle] from the [Tomsk] hotel to Berlin in her luggage, said one of the employees of FBK [Navalny’s Anti-Corruption Foundation]”, according to Zakharov and Badanin. “In fact, it was Pevchikh’s march across the border that made it possible to prove that Navalny was poisoned by Novichok. Pevchikh herself confirmed to the Project the details of this story.”

The Russian Reporter and Project also claim that “an expert examination of the clothes that Navalny was wearing on the plane could give an answer to some questions. However, according to the Project, they remained in Omsk. Navalny’s wife, Yulia, took his suitcase with her to Germany, but only after a fight, literally defending it in Omsk, when law enforcement officers tried to take it away.”

Certain it is now that Pevchikh is no longer in Germany. Government spokesman Steffen Seibert said: “I can’t tell you anything about this. We must not forget that an attempt was made on the life of Mr Navalny with the use of a poisonous substance. But I can’t tell you anything about the location of an individual. ” Seibert implies the German police have not interviewed Pevchikh as a material witness of the crime which Seibert insists was committed.

Left, image of a woman’s leg in the hotel room from Russian video clip released today by the Navalny group. Centre, Foreign Secretary Raab in the British media video clip published by The Sun. Right, Maria Pevchikh, in a photograph published by Russian Reporter (РОССИЙСКИЙ РЕПОРТЁР) at the same time as the Navalny group issued their Instagram video.

According to this report, Pevchikh and several male members of Navalny’s group had remained in Tomsk after his departure, and were “having breakfast on the ground floor [of the hotel] at the Velvet Restaurant. The incident [in Omsk] immediately prompted the [Navalny group] employees to collect everything that could be related to the poisoning.” In fact, according to the clock in the hotel room, the time was 11:45 – long after breakfast time in Tomsk, and an hour after Navalny was hospitalised in Omsk.

Navalny's room, according to Russian Reporter, “had not yet been given to new residents, and cleaning at the hotel begins slowly just after 10-11 am, the Project correspondent who stopped there was convinced. Activists of the local headquarters of the [Navalny] Fund arrived to help the remaining employees of the FBK [Navalny’s Anti-Corruption Foundation], and a watch was organized at number 239, where Navalny lived. As a result, they took away several items that Navalny could have used that morning. Among them — a drunken bottle of water of the Saint Springs brand.”

The Xander Hotel in Tomsk is a four-star establishment. Check-out time, according to the hotel’s publicity, is from midnight to noon; new guests can enter their rooms from 2 in the afternoon. The disarray of the room shown in the Navalny film reflects, not slowness of the maid’s work, but the police order to leave the room untouched. If the Navalny staff who are shown in the film were collecting evidence on their suspicion of poisoning, they were not wearing protective garb, not even face masks. Hand gloves served only to mask fingerprints on the bottles.

The evening duty manager at the hotel was asked to confirm what brand of bottled water is stocked in the minibars; at what time the hotel rooms are cleaned after guests leave; and what room is depicted in the video – Navalny’s or Pevchikh’s. The duty manager said she is unable to answer such questions, and referred them to the daytime hotel manager. The answers have yet to be given.

The London film clip has also been edited to remove the dialogue of the maid and Pevchikh. Instead, Raab , reading from a foreign ministry script, is shown as declaring: “from the UK’s point of view, it is very difficult to see any plausible alternative explanation to this being carried out by the Russian intelligence services, but certainly the Russian Government has a case to answer.”

The New York Times reported the Navalny story without checking the details of the film, the bottle count, the time on the room clock, Pevchikh’s role, the reaction of the hotel staff, or the local police.

“In a video posted on Instagram, members of Mr. Navalny’s team swiftly [sic] donned rubber gloves and scoured his room at the Xander Hotel in Tomsk, packing evidence into blue plastic bags. The plastic water bottle, Mr. Navalny’s team and German investigators say, eventually helped German military scientists determine that the opposition leader had been poisoned with a class of chemical weapon called a Novichok, a Soviet-designed poison that Russian operatives have used in at least one previous assassination attempt. The rush [sic] to grab evidence suggests that Mr. Navalny and his team had been prepared for the eventuality that there would be an attempt on his life… Immediately [sic] after Mr. Navalny’s plane made an emergency landing, his aides spoke with members of the team who had stayed in Tomsk to tell them what had happened, according to Mr. Navalny’s Instagram post. ‘At that moment, they did the one thing that was possible,’ the statement said. ‘They called a lawyer, went to the hotel room, which Navalny had just left, and began to identify, record and pack up everything [sic] that they found, including bottles of water from the hotel.’”

This is proof that no court of law can admit anything purported to have been taken from the Xander Hotel in Tomsk as evidence of a crime. The Navalny group, the London Sun, and the New York Times are taunting Chancellor Angela Merkel.