March 31, 2021
Here comes the loaded-to-the-gunnels American ATB petroleum tanker "Jake Shearer" again, currently northbound in Johnstone Strait again. The "Jake Shearer" nearly destroyed the BC Central Coast several years ago after it broke in half with a 10,000 ton load of diesel and drifted out of control to within a cable length of the Goose Islands.

In 2017, this ship very nearly destroyed the British Columbia coastal ecosystem; the Canadian government did nothing then, and is doing the same now. 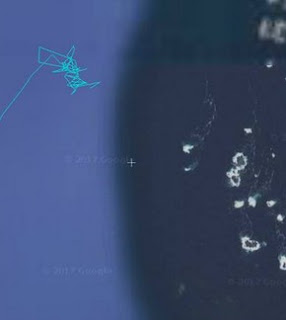 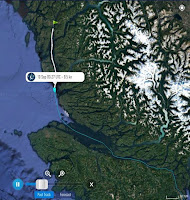 November 26 marked a dreadful anniversary for the tanker-bedraggled British Columbia coast. One year ago in Hecate Strait, the American ATB “pusher tug” Jake Shearer broke apart from its fully loaded 10,000 deadweight-ton capacity petroleum barge and came within a stone’s throw of destroying the most magnificent, wild and precious region of the Pacific Ocean.

The Jake Shearer is a new-generation tugboat which is set up to lock into, and push its petroleum barge rather that towing it by cable in the conventional manner.

The bow of the tug is fitted with two giant hydraulic locking pins, while its tanker barge is fitted with a large notch cut out of its transom. Once mated together, these two vessels then become an “articulated tug/barge unit” or “ATB.” The tug pushes into the transom notch and the locking pins extend out sideways from the bow and engage into large racks fitted within the transom of the barge. Then, mated together “doggy style” as it were, the tug/barge combo goes about its business.

In this case, the business of the Jake Shearer was to deliver domestic petroleum products to Southeast -AKA “Panhandle” Alaska, which it did on a regular, once every 2-3 week schedule, travelling back and forth through the BC Inside Passage. Alaska’s 5 oil refineries supply about 80% of its domestic fuels needs, but the remaining 20% is delivered to the “Panhandle” via the BC coast by ATB, -with each trip carrying on average, a load of about 10,000 deadweight tons. To illustrate, that is about 1/4 of the spill volume released into the Gulf of Alaska by the Exxon Valdes.

The Jake Shearer is owned by Harley Marine based in Seattle, which has replaced the Texas-based ATB operator Kirby Corporation which used to own the Alaska run until they wrecked the ATB tanker, Nathan E Stewart near Bella Bella only 2 years ago. Kirby, whose motto is: “Putting America’s Waterways to Work,” owns the largest fleet of inshore and offshore tank barges in the USA. When the helmsman of the Nathan E Stewart fell asleep at the wheel and crashed the ATB onto the rocks, the tugboat sank and began spewing oil into the sea. To this day, the waters of Seaforth Channel, near Bella Bella, remain polluted and off-limits to seafood harvesting by Department of Fisheries and Oceans order. As a result of that wreck, Kirby Corp lost its special privilege of being exempted from the requirement of carrying a Canadian Pilot aboard that applies to every other tanker that travels in Canadian waters. The cost of carrying a Canadian Pilot was, apparently, too costly for the Kirby Corp, and they abandoned the business.

Harley Marine enjoys this special privilege and its vessels do not carry Canadian Pilots, -nor any Canadian sailor for that matter-, and they don’t stop in Canada, -with the exception of loading at the Kinder Morgan or Chevron spigots at Burnaby. Harley Marine is so confident in the security of its business arrangement in Canadian waters that it has built 5 brand-new identical sister-ATB’s to the Jake Shearer over the past 3 years. No doubt, the 12,000 deadweight-ton loophole in the Trudeau regime’s so-called “North Coast Tanker Ban,” which allows for, and perpetuates this Alaska-bound ATB traffic has encouraged this massive investment.

The Jake Shearer was proceeding northbound off Hakai Pass on that ill-fated evening one year ago, in rather ordinary November sea conditions for Hecate Strait. “Ordinary weather” meaning it was only blowing 50 knots southeast with 4 metre seas. Hecate Strait is infamous for its horrific storms. Prudent mariners enter Hecate Strait in November prepared for and equipped to handle 100 knot storms. Suddenly the American ATB was hit by a series of “rogue waves” and the tug and its tanker barge, -loaded with 5 million gallons of diesel and regular unleaded gasoline- were ripped apart. In that location, the mighty tides flowing out from Hakai Pass debouch into Hecate Strait, and against the winds of a southeast storm, big, tumultuous, wind-over-tide seas can result.

The Jake Shearer was severely damaged and very nearly sunk. Having broken apart, the tug ran right up over the transom of the barge and stuck there for several minutes before sliding back into the water. There was serious buckling, cracking and holing of the hull below the water line where the pins bent and tore loose. Seawater was pouring into its tanks. Up in the wheelhouse, perched on top of the 70 ft pedestal built to enable the helmsman to see across the top of the 100 metre long barge, the American crew was being bashed around as it swung back and forth in the 4 metre seas in a wild pendulum arc. Windows in the wheelhouse were smashed out. These ATB tugboats are not ballasted to travel in rough waters without being attached to their barge. They radioed in an emergency distress call to Prince Rupert Coast Guard Radio. A number of Coast Guard vessels and tugboats, all hours away, were dispatched to the scene.

As the crew dealt with their numerous emergencies, the loaded fuel barge drifted out of control straight towards the Gosling Rocks, -a formidable set of reefs that extend southwards from the Goose Islands group into Hecate Strait. The ATB’s single working skiff was, -in what can only be described as outright negligent maritime hubris,- inexplicably mounted on the barge, -with no working skiff of any sort on the tug. Additionally, the Jake Shearer carried no conventional towing winch, or any other equipment by which it might retrieve its wayward barge. For more than an hour as the crew struggled to stabilize their stricken vessel, the barge drifted inexorably towards catastrophe.

The confused track of the Jake Shearer desperately trying to prevent its loaded barge
from foundering on the Gosling Rocks. photo: MarineTraffic shiptracker screenshot

Eventually the crew of the Jake Shearer turned to the problem of its drifting barge. They endeavoured to nudge the barge away from its steady trajectory towards the rocks. This is a dangerous maneuver that has resulted in disaster in the past. On the evening of December 22, 1988, the tug, Ocean Service, broke its towline to its barge, the Nestucca, off the entrance to Grays Harbour, Washington State. While maneuvering in rough seas in an attempt to recapture the drifting Nestucca, it punched a hole in one of the barge’s tanks, causing 5,500 barrels of Bunker C oil to spill into the sea. The resulting slick fouled beaches all the way to Cape Scott at the north end of Vancouver Island.

Eventually after a long struggle, two courageous crew were able to leap from the heaving decks of the Jake Shearer to the barge, and from there deploy an anchor, and finally, the Zidell Marine 277 fetched up and held about a stones throw from the Gosling Rocks. The separated vessels were towed the next day to sheltered waters near Bella Bella where temporary repairs were effected by divers. 10 days later, the damaged vessels were tied together with ropes and towed north to Alaska.

When the “Nathan E Stewart” sank in Seaforth Channel, the incident happened at a sensitive time during the Trudeau regimes’ carefully crafted roll-out of announcements designed to soften public opinion towards their pending approval of the Kinder Morgan bitumen pipeline project to the BC coast. As a result, more than $100 million is said to have been spent on removing the sunken wreck from the waters. During the 1 1/2 month salvage operation, virtually every asset of the Canadian Coast Guard made an appearance at the wreck site, as did numerous giant tugboats, barges, the entire fleet of the Kinder Morgan-owned “Western Canada Marine Response Corporation,” gargantuan floating heavy-lift cranes, teams of divers, Lear Jet loads of Texas oilmen, floating man-camps full of personnel, helicopters hovering continuously overhead.

And what of the Jake Shearer disaster, which would have been orders of magnitude a much worse catastrophe than the Nathan E Stewart? The Jake Shearer, by sheer luck, did not spill any oil. Therefore it has been swept under the rug and forgotten. Whereas the Nathan E Stewart disaster prompted Transport Canada as well as American investigations, along with parades of federal government Ministers and dignitaries visiting Bella Bella, -all proffering the usual platitudes that “this can never be allowed to happen again, -with the Jake Shearer nothing at all. There has been no investigation. The Jake Shearers identical sistership ATB’s continue to threaten the BC Inside Passage, each equipped with the same “Articouple” locking pins which failed so dramatically. These ATB’s carry on with no conventional towing winch, and their working skiffs continue to be mounted on their barges.

There is a reasonable, pragmatic and cost-effective solution to this issue. We are not endeavouring to deprive our Alaska neighbours of their domestic fuels supply. This traffic simply needs to travel offshore in proper seaworthy ships, in the designated shipping lanes where all the rest of the tankers must go. It is only about 20% farther for them, and in the event of trouble, there would be sufficient sea-room to effect a proper rescue. It’s time the Government of Canada should stop with proffering platitudes, and step up to do something real that will prevent the next, otherwise imminent ATB disaster.

INGMAR LEE is an activist living on Denny Island in British Columbia.