On the 18th Anniversary of the Invasion of Iraq

20 March 2021
For months before the Iraq War began, I and many others wrote, in print and on-line, about the outrageous lies that were being told by the US government and its media sycophants to bring about this mass-murdering act of aggression. 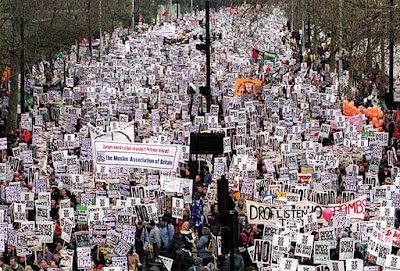 How did we know they were lies? Not from any secret knowledge or insider info, but simply by reading the mainstream media stories of previous years, especially the ones from the mid-1990s that detailed how Saddam's regime had destroyed its WMD program, and how the US and UK governments always had the evidence for this, and knew there were no Iraqi WMDs throughout the propaganda build-up to the war.

We also read the current news of that time, which detailed how Iraq had completely opened itself to the UN inspectors that the US/UK demanded in early 2003, how these inspections were going forward and finding nothing (or rather, confirming what had been reported and what US/UK leaders had known since the mid-1990s.) And we read how the UN inspectors were ordered by the US and UK to leave Iraq in March 2003 -- before they had completed their UN-mandated inspection -- because Bush/Cheney and the Pentagon had already decided the attack must begin in mid-March.

None of this was secret. All you had to do was read the mainstream stories all the way through. (And ignore cable and network TV news, which essentially did nothing but regurgitate a few seconds of Pentagon and White House talking points each night about the "imminent danger" of the non-existent WMDs.) 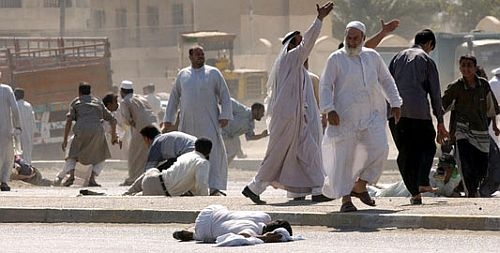 But the war came. Thousands upon thousands of innocent people -- whose lives were worth just as much as those of anyone reading these words right now -- were murdered, slaughtered, destroyed. Millions of lives were ruined. Many, many thousands were tortured. Whole nations were destabilized. The American occupiers recruited, armed and paid local militias of extremists to help them brutally repress the victims of the invasion. Many others were radicalized by their torture in US and UK prisons. The US invasion directly gave rise to ISIS and a whole decade of unimaginable horror and conflict across the region.

Again, all of this was based on demonstrable lies, which many of us called out at the time as lies, using freely available, perfectly "respectable" press reports as the foundation of our opposition to this war crime. Every single person in power who supported the war in Iraq at that time knew everything we ordinary citizens knew at that time. Every US senator blustering for war knew of the long-standing evidence that Iraq had destroyed its WMD program in the early 1990s and had never re-started it. (They also knew that Ronald Reagan and George H.W. Bush had been instrumental in Iraq's earlier WMD program, and had assisted Saddam in conducting WMD attacks in his war against Iran and the Kurds.) If any person in power at that time tells you they didn't know all this -- that they didn't know what ordinary citizens could read in the papers -- then they are lying through their teeth.

So what happened to the perpetrators of this monstrous, murderous atrocity? Nothing. What happened to those in power, both in politics and media, who supported this mass murder? Nothing. Absolutely nothing. What would you do if the most beloved person in your life was viciously, brutally murdered – and nothing was done, if the murderer went free, went on to live in wealth and comfort and privilege and power? How would you feel? Imagine that for a moment – then extrapolate it by tens of thousands. THAT is what those in positions of power in 2003 did with their instigation or support of a war based on lies which they KNEW at the time were lies, just as all of us who read ordinary press reports knew they were lies. They helped murder someone just like the most beloved person in your life.

Look, I recognize the realities of life. I know we live in a fallen world. I know that we are often faced with choosing what we hope will be the lesser of the evils that confront us. I don’t demand perfect moral purity in the reeking, blood-choked cesspool of our power systems. But I cannot and I will not forget what these people have done, what they have countenanced, what they have championed. I will not ever in my heart absolve them of their evil. And even if I am forced by the corrupted currents of this world to choose any of them over some even greater evil, I will never stop seeing the blood dripping from their hands. I will never stop despising them with every fiber of my being.