THE BORNHOLM BASH, THE BALTIC BLUFF, THE BLINKEN BLINK – THE RETREAT OF FORCE FROM WAR

@bears_with
April 7, 2021
This is the way it is going.
A veteran German source, whose family comes from Prussia and knows the history of wars on the Eastern Front very well, says that the Poles “are notoriously bad at bluffing. They threaten beyond their capacities. They invite trouble, and when it happens, they fold.” A veteran Polish source from Cracow, in Polish Galicia, says the same of the Ukrainians. 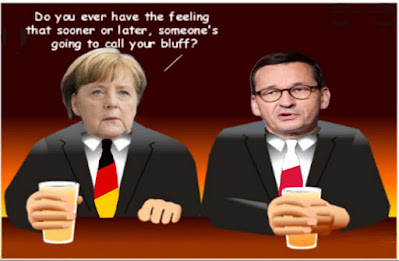 The Americans, both German and Polish sources agree, don’t understand bluffing at all because the proxy forces, Polish and Ukrainian, they are threatening Russia with will be sacrificed to their deaths, not American ones — if the Russians call the bluff now on the Donbass line.

Moscow - At the Chancellery in Berlin these three things are so well understood, the silence of the German response to them has been deafening.

The latest Baltic bluff was the closest the Polish military has come to attacking a Russian vessel in many years.

It began on March 28, in waters of the Danish Exclusive Economic Zone off Bornholm Island, a Danish territory occupied by Germany during World War II; and then by Soviet forces between 1945 and 1946.  The island is equidistant by less than 100 kilometres from the Swedish coast to the north, the Polish coast to the south, and the German coast to the southwest. For a time, it was the declared position of the government in Moscow that if Denmark stationed troops on the island,  that would amount to a declaration of war. The policy was modified to accept a Danish garrison for self-defence, but not American or other NATO forces.  A military attack on a Russian vessel in this area is still  casus belli.

On April 1 Kommersant of Moscow reported the detailed account of the Nord Stream spokesman Andrei Minin, who was first quoted by the state news agency, RIA Novosti.

“ ‘We are talking about clearly planned and prepared provocations using both fishing vessels and warships, submarines and aircraft in order to hinder the implementation of an economic project. This is probably the first and unprecedented case of this kind in history,’ he told the agency.

“According to Mr. Minin, on March 28, an unidentified submarine surfaced in the security zone of the pipe-laying vessel Fortuna (a temporary restricted zone of 1.5 miles is being established for the duration of construction) at a distance of less than one mile. ‘Given that the anchor lines of the Fortuna are located at a distance of more than one mile, the actions of the submarine could disable the entire anchor-positioning system of the pipe- laying vessel and lead to a damage emergency to the pipeline,’ said Mr. Minin.

“As the representative of Nord Stream 2 AG adds, on March 29, a Polish Navy warship (tactical number 823) performed manoeuvers around the Fortuna. Because of this, the support vessel Lifeguard Karev had to go on a parallel course, accompanying the warship. According to open information, under this number in the Polish Navy is the military transport ship Cracow, built in 1990, which can also perform the functions of a mine-layer (based in Svinoustye as part of the 8th Coastal Defense flotilla).”

“In addition, in the second half of March, the number of flights of foreign aircraft over the pipe-laying fleet increased, Mr. Minin said. In particular, the Polish anti-submarine aircraft PZL-Mielec M-28B1 Rbi regularly flies over the work area at a low altitude and at a close distance from the pipe-laying vessel.”

“On February 22, while laying a pipe south of the Danish island of Bornholm, the Polish fishing vessel SWI-106 entered the protected area of the work. ‘Attempts to establish radio communication with it were not successful,’ Mr. Minin said. The supply ship Vladislav Strizhev ‘was forced to go on a diversion course;  as a result, SWI-106 made a collision attack on the ship Vladislav Strizhev. After the collision, the captain of the fishing boat got in touch and admitted his guilt in the incident. ‘Through the Russian consulate in Germany, a maritime protest was declared for this incident,’ said the manager of Nord Stream 2 AG.”

“On March 30, at night, two objects appeared on the radar of the ship Lifeguard Karev in the immediate vicinity of the vessel. The first one was moving towards the Fortuna, not answering calls on the radio channels. The Lifeguard Karev began moving towards the object on an intersecting course using ship searchlights. It turned out that it was a fishing boat that changed course without making radio contact. The second vessel, which was waiting southwest of the Fortuna, also went off without answering radio calls.”

RIA Novosti has published photographs and video clips of two Polish Navy warships close to the Fortuna; a flyover by the Polish Navy aircraft; and the unidentified, probably Danish submarine at surface.

The official response of the Polish military operations command was that  there had been no threat of attack.

“The Polish Navy does not carry out any provocative activities and carries out its statutory tasks in accordance with international law. M-28B Bryza aircraft regularly carry out patrol and reconnaissance flights in the Baltic Sea area.”

In the days which have followed, there has been no repeat of the close encounters, neither at sea nor in the air. Instead, the spokesman of the Polish intelligence services and the Ministry of Interior, Stanislaw Żaryn, launched a stream of accusations on his Twitter account.  According to Zaryn, Russian public disclosure of the Baltic engagements was “information warfare” intended as a “pretext for launching activities aimed at enhancing its military presence in the Baltic region”.  He went on:

“#NordStream2 may be used by #Russia as a pretext for the deployment of its naval forces along pipeline’s route. This may lead to a partial closure of the Baltic Sea.”

Zaryn also claimed the Russian press reports had given out “false information”. It had been “deceitful” of the Russians, Zaryn added, to make “insinuations that Poland is sabotaging construction and physically attacking the Russian-German investment.” Read Zaryn’s claims in Polish here.

The Nord Stream 2 pipeline was Russian “aggression”, Zaryn had written in a US military publication on March 31.

“If built, Nord Stream 2 will pose an intelligence threat to the West. There exists the risk that the infrastructure used to lay the Russian pipeline beneath the Baltic Sea may allow the Kremlin to deploy surveillance devices…Equally salient is the risk that Russia may one day deploy its naval forces along the pipelines’ routes on a national security pretext, leaving much of the Baltic Sea unnavigable, including for LNG carriers, cargo ships, the navies of the countries surrounding this body of water and NATO maritime forces. In such a scenario, the potential for escalation is clear.”

Zaryn was continuing this line of attack yesterday:

Zaryn has been closely associated with Mariusz Kaminski for several years. Kaminski headed Poland’s Anti-Corruption Bureau (CBA) from 2006 to 2009; he was convicted of abuse of power in that role in 2015; pardoned and put back in office as the minister in charge of the CBA, Poland’s foreign intelligence service (AW), and other security services under Kaminski until 2019; when Kaminski became Minister of Interior in 2019, Zaryn has continued in the spokesman’s role.

The Polish operations south of Bornholm followed the explicit warning which US Secretary of State Blinken had announced at a NATO meeting in Brussels on March 23. Reuters, the New York-based propaganda agency, had headlined Germany as the target of Blinken’s warning:

The pipeline, Reuters quoted Blinken as saying, “‘has the potential to undermine the interests of Ukraine, Poland and a number of close partners and allies,’ Blinken added, saying that a U.S. law required Washington to impose sanctions on companies participating in the Nord Stream 2 project. Blinken also emphasized Washington’s opposition to the pipeline in his meeting with German Foreign Minister Heiko Maas on Tuesday, U.S. State Department spokesman Ned Price said in a statement.”

Reuters was propagandizing. Blinken’s State Department communiqué on his meeting with Maas said less.  Blinken “underscored the U.S. commitment to work with Allies and partners to counter Russian efforts to undermine our collective security and, in that vein, emphasized U.S. opposition to the Nord Stream 2 pipeline.  Secretary Blinken and Foreign Minister Maas further discussed Afghanistan and pledged to remain in close coordination on the path forward.  The Secretary and the Foreign Minister stressed that bilateral, U.S.-EU, and Transatlantic cooperation are essential in confronting shared challenges and opportunities.”

The German Foreign Minister did not acknowledge hearing a warning; he said nothing at all.  That was on March 23.

Since March 28, when the Polish operation began at sea, no German government official has publicly responded to the Poles, or to the Russian reaction which started on April 1. Steffen Seibert, spokesman for Chancellor Angela Merkel, has not referred to the incidents in his Twitter stream. Merkel has said nothing. When Merkel held a video conference with President Vladimir Putin and French President Emmanual Macron on March 30, there is no sign that the Baltic incidents were mentioned.

Instead, according to the Kremlin communiqué, the emphasis was on the Ukraine front. “The Russian leader expressed serious concern about the escalation of armed confrontation on the contact line being provoked by Ukraine and its refusal to implement the additional measures to strengthen the ceasefire coordinated by the Trilateral Contact Group in July 2020. The leaders’ political advisers will continue their joint efforts.”  The Berlin version of what they discussed downplayed the Ukraine conflict in order to emphasize the Sputnik-V vaccine.

The German blackout, according to German sources, is a warning to Warsaw, and also to Washington, not to count on German support if their threat-of-attack moves lead to direct military engagement. That is also a threat of a German veto if Blinken, the Poles,  and the Ukrainians press their case for NATO intervention.

NOTE: In the lead illustration, left, German Chancellor Angela Merkel; right, Polish Prime Minister Mateusz Morawiecki. Hours after this was published this morning, Merkel and Putin held a telephone conference, apparently initiated by Putin.  According to the Kremlin communique, "the two leaders had a detailed discussion on a number of topical international matters. While exchanging opinions on ways of resolving the intra-Ukrainian crisis, the Russian President and the German Chancellor voiced concern in connection with the escalation of tensions in southeastern Ukraine. Vladimir Putin drew attention to the provocative actions of Kiev which is now deliberately aggravating the situation along the line of contact. The parties noted the need for the Kiev authorities to implement earlier agreements without fail, in particular those aimed at the launch of direct dialogue with Donetsk and Lugansk and at legally formalising the special status of Donbass. They urged the parties to the conflict to display restraint and to invigorate the negotiating process in order to fully implement the 2015 Minsk Package of Measures as the only legal foundation for a peace settlement. They reaffirmed their commitment to further close coordination of Russian and German efforts, including within the Normandy Format, between political advisers and foreign ministers."