If You Knew Charlie... 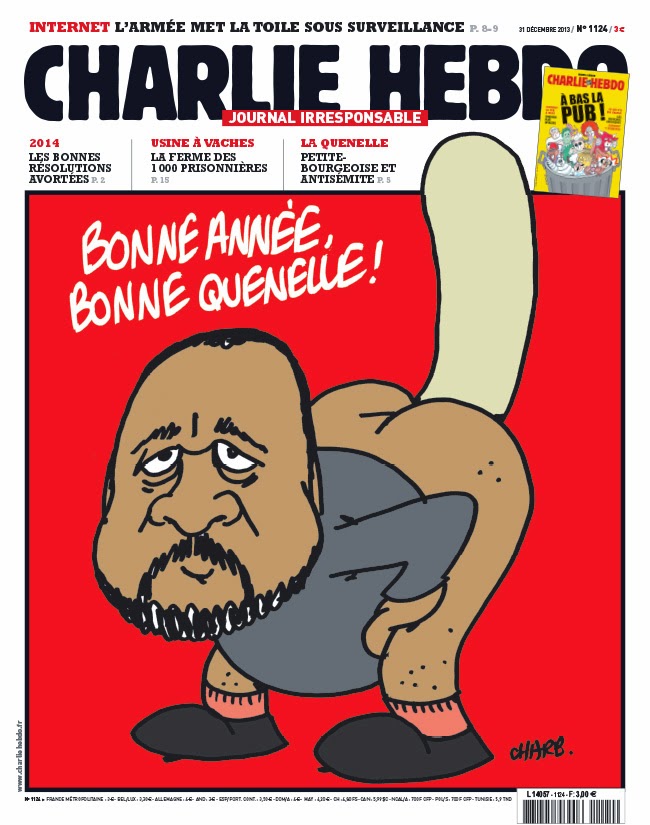 Which just goes to prove the hoary old showbiz observation that “dying can be a good career move.” That dictum describes how washed-up artists and other celebrities are often rescued from obscurity following their death, with sales of old records or biographies benefiting from a surge in renewed public interest.

The same would appear to be true for the previously obscure French political weekly magazine where 12 people, including senior editorial staff, were shot dead last week allegedly by gunmen claiming to be affiliated with the Al Qaeda/Takfiri terrorist network.

(The network instigated and spawned by Western military intelligence for all sorts of covert operations, including regime change in Arab and Muslim countries.)

The remaining staff at the Paris-based publication have this week produced an edition despite the trauma of the past seven days. But instead of the usual 60,000 copies, the publication has hit a record print run of 3 million. Some Paris news agents were reportedly sold out within minutes of opening.

Online editions have also been translated into several languages in addition to the normal French version. And the magazine has reportedly been inundated with new subscriptions and donations from around the world amounting to over $1 million.

Moreover, French newspapers and other international media have reprinted the front page of the magazine, although many major outlets, including American news channels CNN and ABC, as well as the New York Times, declined to print it (more on that in a moment).

So, from a financially struggling magazine that catered for a minority of readers, many of whom were reactionary bigots, Charlie Hebdo has become an international sensation. On the back of its slain cartoonists, the publication can look forward to lucrative sales and a global readership.

A good career move indeed. And presumably that cynical conclusion won’t be objected to by our Western satirists given their supposed commitment to freedom of expression.

The stellar outcome for the French hate-rag is unfortunate. That’s because this magazine is not the paragon of free speech and intelligent political satire that has been made out by Western governments and the mainstream media since the killings last week by two gunmen, who by the way were well known to French state security services for their terror links.

Charlie Hebdo is more accurately described as a publication that excels in inciting hatred and dehumanizing stereotypes of Muslims in particular. Apologists for the rag, claim that it is an “equal opportunity” exponent of satire, ridiculing all political and religious organisations. That is not true. A review of its past contents show that the publication is not the fearless champion of free speech that all the weeping millions of “Nous Sommes Charlie” supporters would have us and themselves believe. It has never, for example, given deserved criticism of Western-sponsored Zionist terrorism towards Palestinian civilians, human rights defenders, medical aid workers and journalists.

The magazine has abused the principle of free speech as a cynical cover to promote hate speech and in particular to foment prejudice against the Muslim population of France and Europe more generally.

Muslims have become the most vulnerable community in Europe and around the world for persecution by Western state and non-state bigots. Over the past week, Muslim communities and places of worship have been attacked by mobs in Germany and France amid the climate of hatred that the likes of Charlie Hebdo and its state benefactors have been responsible for.

The French government might claim this week that it is “at war with terrorism, not Islam.” But that is disgraceful cop-out of responsibility by the French authorities. All Western governments are responsible for fuelling a nefarious climate of Islamophobia and negative stereotyping of “Muslims as terrorists” over the past several years. It is absurd for these governments to try now to disclaim responsibility while they continue to bomb Muslim countries in a fictitious “war on terror” against extremist groups that Western states have created in the first place to advance their imperialist agendas. Added to this are Western state police powers directed towards the Muslim community and legions of unlawful imprisonments and other miscarriages of justice.

The French government has not merely allowed the hate-inciting Charlie Hebdo to spew its anti-Muslim bigotry every week. By doing so gives the publication’s nauseating contents a tacit seal of official state approval. A privilege that is not extended to viewpoints that criticise Zionism, even though the latter is deserved and legitimate under principles of free speech.

Astoundingly, over the past week, the Charlie Hebdo hate-rag has been transformed by the French authorities into some of kind of heroic standard bearer and model of Western democratic enlightenment. The names of its deceased cartoonists have been cited with honours and cherished like saintly figures. French national narcissism has gone into self-serving overdrive, and we are all supposed to murmur with touching respect.

The French and international public are being manipulated as never before to rally behind dangerous reactionary anti-Muslim prejudices - and all this is presented as a virtue so beautiful that tears are to be shed!

The latest edition of the hate-filled French magazine features on its front page yet another cartoon of the Prophet Mohammed (PBUH). As noted above, several Western mainstream media outlets have refused to re-print the cover, meekly saying that it may be “construed as provocative.” Provocative is an understatement.

This rag has poisoned societies with its bigotry that has culminated in fuelling violence - violence that is felt mainly by Muslims. And yet shamelessly it peddles another gratuitous insult against Muslims and claiming it as a self-vindication.

As ever, the Muslim world is responding with restraint and dignity to the latest vile conduct by Western so-called free-speech secularism.

All humanists must find ways of defeating Western state-sponsored hostility and violence by peaceful means. Further violence and death is only a boon for the bigots and the authors of conflict. For them, death, violence and terrorism are always a “good career move.”

Finian Cunningham (born 1963) has written extensively on international affairs, with articles published in several languages. He is a Master’s graduate in Agricultural Chemistry and worked as a scientific editor for the Royal Society of Chemistry, Cambridge, England, before pursuing a career in newspaper journalism. He is also a musician and songwriter.


For nearly 20 years, he worked as an editor and writer in major news media organisations, including The Mirror, Irish Times and Independent. Originally from Belfast, Ireland, he is now located in East Africa working as a freelance columnist for Press TV and Strategic Culture Foundation (Moscow).