Retrenchment or Retreat: What's Behind US Abandonment of al-Tanaf?

The U.S. is giving up its hopeless position at the Syrian-Iraq border crossing near al-Tanf in south east Syria. The U.S. military had earlier bombed Syrian forces when they came near that position but it then found itself outmaneuvered, cut off from the north and enclosed in a useless area.

Al-Tanf is in the blue area with the two blue arrows at the bottom of the map. It will soon be painted red as liberated and under Syrian government control. 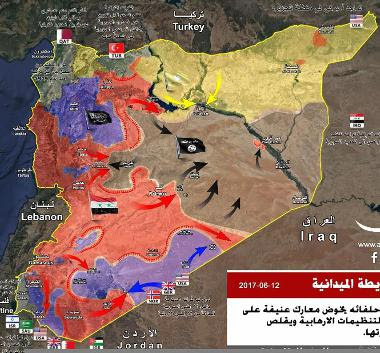 
A more expressive version of the map: 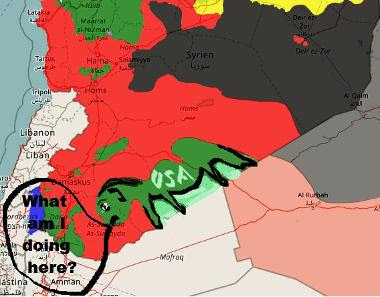 
The U.S. plan was to move from al-Tanf north towards the Euphrates river and to thereby capture and control the whole south-east of Syria. But Syria and its allies made an unexpected move and prevented that plan. The invaders are now cut off from the Euphrates by a Syrian west-to-east line that ends at the Iraqi border. On the Iraqi side elements of the Popular Military Unites under the command of the Iraqi government are moving to meet the Syrian forces at the border.

The U.S. invaders are now sitting in the mid of a piece of rather useless desert around al-Tanf where their only option is to die of boredom or to move back to Jordan from where they came.
Syria Summary - The End Of The War Is Now In Sight - June 13


The U.S. military even moved a HIMARS missile launcher with 300 km reach from nearby Jordan to al-Tanf. That was a laughable stunt. It made no difference in capabilities from the earlier launcher position in Jordan just a few miles west. But someone the U.S. military believed that showing off such weapons in a doomed area would impress Syrian or Russian forces and change the facts of life. It didn't. It was clear that the U.S. would have to move out.

That now seems to happen. A knowledgeable source just posted:

Evidently Tanf FSA really are being flown to Shaddadi. Plan C is in effect.


There were several rumors to this regard since yesterday and the above now confirms them. Lol indeed.

About 150 or so U.S. trained Arab fighters will be flown from al-Tanf to north-east Syria where they will join the (hated) Kurdish forces. They may later try to reach the ISIS besieged Deir Ezzor from the north or get pushed into some suicide mission against another ISIS position. The Syrian army will approach and liberate Deir Ezzor most likely from the south and east. It is unlikely that it will let U,S. proxy forces take part in that. The U.S. contingent will move west out of al-Tanf and back into Jordan. The Syrian and Iraqi forces will take over the Al Waleed border crossing at al-Tanf and the regular commercial traffic on the Damascus-Baghdad road will resume.

The various propagandists who argued for a big U.S. mission to occupy the whole Iraqi-Syrian border and all of east Syria have lost. The "Shia crescent" between Iran and Lebanon they claimed to prevent with such a move was never a physical road connection and certainly nothing the U.S could fight by any physical means. Their pushing for a U.S. occupation of east Syria and incitement of a larger conflict has for now failed.
Posted by Gorilla Radio Blog at Saturday, July 01, 2017