So, the NYT Can Climb Down (it just takes a long time) 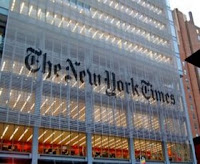 The New York Times has finally admitted that one of the favorite Russia-gate canards – that all 17 U.S. intelligence agencies concurred on the assessment of Russian hacking of Democratic emails – is false.

On Thursday, the Times appended a correction to a June 25 article that had repeated the false claim, which has been used by Democrats and the mainstream media for months to brush aside any doubts about the foundation of the Russia-gate scandal and portray President Trump as delusional for doubting what all 17 intelligence agencies supposedly knew to be true.

In the Times’ White House Memo of June 25, correspondent Maggie Haberman mocked Trump for “still refus[ing] to acknowledge a basic fact agreed upon by 17 American intelligence agencies that he now oversees: Russia orchestrated the attacks, and did it to help get him elected.”

However, on Thursday, the Times – while leaving most of Haberman’s ridicule of Trump in place – noted in a correction that the relevant intelligence “assessment was made by four intelligence agencies — the Office of the Director of National Intelligence, the Central Intelligence Agency, the Federal Bureau of Investigation and the National Security Agency. The assessment was not approved by all 17 organizations in the American intelligence community.”

The Times’ grudging correction was vindication for some Russia-gate skeptics who had questioned the claim of a full-scale intelligence assessment, which would usually take the form of a National Intelligence Estimate (or NIE), a product that seeks out the views of the entire Intelligence Community and includes dissents.

The reality of a more narrowly based Russia-gate assessment was admitted in May by President Obama’s Director of National Intelligence James Clapper and Obama’s CIA Director John Brennan in sworn congressional testimony.

Clapper testified before a Senate Judiciary subcommittee on May 8 that the Russia-hacking claim came from a “special intelligence community assessment” (or ICA) produced by selected analysts from the CIA, NSA and FBI, “a coordinated product from three agencies – CIA, NSA, and the FBI – not all 17 components of the intelligence community,” the former DNI said.

Clapper further acknowledged that the analysts who produced the Jan. 6 assessment on alleged Russian hacking were “hand-picked” from the CIA, FBI and NSA.

Yet, as any intelligence expert will tell you, if you “hand-pick” the analysts, you are really hand-picking the conclusion. For instance, if the analysts were known to be hard-liners on Russia or supporters of Hillary Clinton, they could be expected to deliver the one-sided report that they did.


In the history of U.S. intelligence, we have seen how this selective approach has worked, such as the phony determination of the Reagan administration pinning the attempted assassination of Pope John Paul II and other acts of terror on the Soviet Union.

CIA Director William Casey and Deputy Director Robert Gates shepherded the desired findings through the process by putting the assessment under the control of pliable analysts and sidelining those who objected to this politicization of intelligence.

The point of enlisting the broader intelligence community – and incorporating dissents into a final report – is to guard against such “stove-piping” of intelligence that delivers the politically desired result but ultimately distorts reality.

Another painful example of politicized intelligence was President George W. Bush’s 2002 National Intelligence Estimate on Iraq’s WMD that removed State Department and other dissents from the declassified version that was given to the public.

Since Clapper’s and Brennan’s testimony in May, the Times and other mainstream news outlets have avoided a direct contradiction of their earlier acceptance of the 17-intelligence-agencies canard by simply referring to a judgment by “the intelligence community.”

That finessing of their earlier errors has allowed Hillary Clinton and other senior Democrats to continue referencing this fictional consensus without challenge, at least in the mainstream media.

For instance, on May 31 at a technology conference in California, Clinton referred to the Jan. 6 report, asserting that “Seventeen agencies, all in agreement, which I know from my experience as a Senator and Secretary of State, is hard to get. They concluded with high confidence that the Russians ran an extensive information war campaign against my campaign, to influence voters in the election.”

The failure of the major news organizations to clarify this point about the 17 agencies may have contributed to Haberman’s mistake on June 25 as she simply repeated the groupthink that nearly all the Important People in Washington just knew to be true.

Even after the correction, the Times quickly returned to its pattern of deceiving its readers regarding the U.S. intelligence assessment. On June 30, a Times article reported: “Mr. Trump has repeatedly cast doubt on the unanimous conclusion of United States intelligence agencies that Russia sought to interfere in the 2016 race.”

The phrasing “unanimous conclusion” again suggests that all 17 intelligence agencies are in accord, albeit without specifically saying so, a journalistic sleight of hand that raises further doubts about the objectivity and honesty of the Times on this issue.

The Times’ belated correction — and its new deceptive formulation — underscore the growing sense that the U.S. mainstream media has joined in a political vendetta against Trump and has cast aside professional standards to the point of repeating false claims designed to denigrate him.

That, in turn, plays into Trump’s Twitter complaints that he and his administration are the targets of a “witch hunt” led by the “fake news” media, a grievance that appears to be energizing his supporters and could discredit whatever ongoing investigations eventually conclude.