Peskov's Curious Comments: Losing His Head, Or Getting Ahead of Putin?

Moscow - At 19:50 on Thursday evening Moskovsky Komsomolets (MK), one of the largest circulation newspapers in Russia, published an announcement from Dmitry Peskov, spokesman for the Kremlin.

“The Russian President’s Press Secretary Dmitry Peskov has said that the Kremlin will check information from the investigation of Bellingcat and The Insider on suspects of the Salisbury poisoning of the Skripals where it is claimed that Ruslan Boshirov, accused by London of involvement, is a member of GRU, Hero of Russia, Colonel Anatoly Chepiga.

“In the words of Peskov, in the Kremlin [officials] intend to check the lists of recipients from the President of this title. He added that the official position is still unchanged. And it was announced by the President, and the suspects themselves.”


When Peskov claimed the Kremlin “will [sic] check information from the investigation of Bellingcat”, more than twenty-four hours had already passed since he had first seen the Bellingcat report on Boshirov and Chepiga. That Peskov did not already have the GRU file on Chepiga, the Hero of Russia list, and the relationship between Chepiga and Boshirov is impossible.

The statement has stunned Moscow political sources. Their assessment is that the man who says these things because he believes them to be true, or because he believes Russians and others will believe he is telling the truth, has lost contact with reality.

“I have not seen such unprofessional conduct at any time throughout Putin’s presidency,” commented a veteran Moscow publisher.

“This means they are making things up as they go along.”

“Peskov’s last line is the most extraordinary of all. He is saying Putin is running this show and he is doing a bad job of it. Peskov put responsibility for the entire Skripal affair on to Putin, and implied he should deal with it himself. Peskov just threw Putin under the bus.”


On Thursday Putin was travelling. He stopped in Baku, Azerbaijan, to attend a world judo championship and to meet Azerbaijan’s President, Ilham Aliyev. He then flew to Tajikistan where he had dinner with government leaders from Azerbaijan, Belarus, Kyrgyzstan, Kazakhstan, Moldova, Uzbekistan, Armenia, and Turkmenistan. On Friday they plan a summit conference together.

The Kremlin photographs indicate that for this trip Putin left Peskov at home. Putin was still eating in Dushanbe when MK posted its report from Peskov. 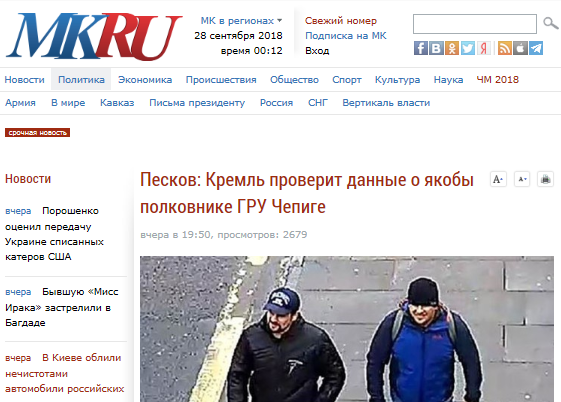 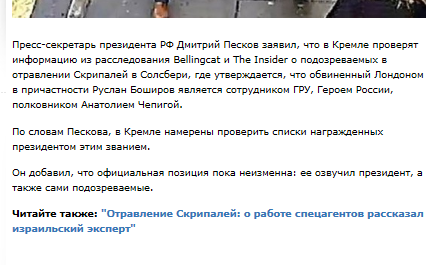 The last paragraph refers to the President’s impromptu statement on September 12 in Vladivostok. Putin was asked about British identification of the two suspects in the Skripal case, named in London as Ruslan Boshirov and Alexander Petrov. For that story, read this. This is how Putin responded. 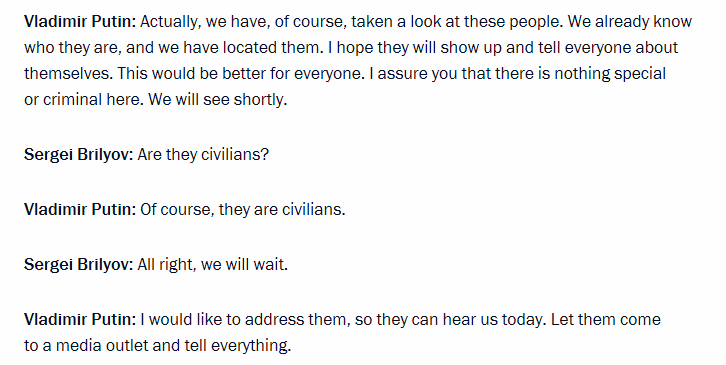 “Of course they are civilians” – Putin may not have been expecting the question from Sergei Brilyov, a reliable interviewer of high state officials and anchor of Vesti V Subbotu (News on Saturday) broadcast on Rossiya TV Channel. Businessmen engaged in importing vitamin pills, energy drinks and health powders was also what Boshirov and Petrov said they were on the next day, September 13, in a televised interview on RT.

In the two weeks which elapsed since then, Russian media investigations of Boshirov and Petrov have picked apart what the duo claimed for themselves, and also the allegations by the Metropolitan Police in London. There is still no Interpol Red Notice for either man, although the British announced they had applied to Interpol more than three weeks ago.

On Thursday morning the entire London press opened the file on Colonel Chepiga. Here is one of the versions. 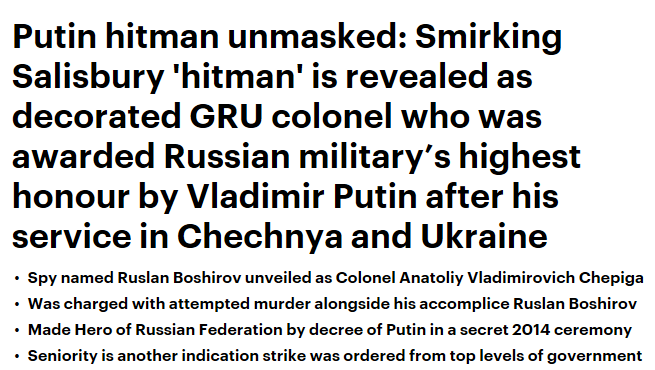 There was a single source for the fresh name: “The disclosure, uncovered by investigative journalist organisation Bellingcat,” reported the Daily Mail, “exposes as lies Putin’s claims that the Skripals’ would-be killers were innocent ‘civilians’.”

According to the Mail,

“the Metropolitan Police, who are investigating the poisoning, and the Foreign Office declined to comment on the Bellingcat/Telegraph report. But British defence minister Gavin Williamson appeared to confirm its veracity on Twitter.” The newspaper added the correction: “Gavin Williamson tweeted spy’s identity was ‘confirmed’ then deleted message.”


The Guardian was unable to report what its check of the Bellingcat story with the police or any other British government agency had turned up. “British investigators,” claimed the Guardian, “also believe one of the pair is Chepiga, the Guardian understands.”

The Telegraph declared through its “chief reporter” that Bellingcat was an “investigative journalist organisation”, and that its sourcing for the Chpegia identification had come from Bellingcat “in conjunction with The Telegraph”. Other British media ignored that selfie.

The Telegraph followed later in the day with the claim that in addition to Petrov and Boshirov aka Chepiga, “a third Russian military intelligence officer who carried out a reconnaissance mission before the poisoning of Sergei Skripal has been identified by counter terrorism police and the security services, the Telegraph understands.” As the passive reflexive tense used for sourcing has spread across the London media, no fresh name has been reported, nor a government official to put his or her name to the charge.

Read the Bellingcat report on identification of Boshirov with Chepiga.


There has been no Metropolitan Police statement or tweet of this name allegation nor confirmation from the Office of Public Prosecutions; they are the government organs responsible for investigation of the Salisbury poisonings, and for issuing indictments, arrest warrants, and the papers required for a criminal court proceeding. To date, no evidence and no charges have been presented in a British court. The New York Times reported: “The police in Britain would not comment on the report”.

Prime Minister Theresa May, who spoke twice at the United Nations on Thursday, has also avoided making the Chepiga allegation. 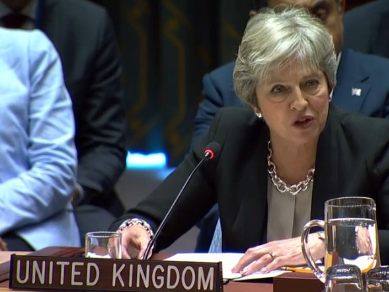 Instead, May repeated what she had already announced at the beginning of this month:

“The United Kingdom,” she told the UN Security Council yesterday, “has presented detailed evidence, clearly laid out in charges of attempted murder and the use and possession of a chemical weapon against two agents of the Russian state. We have taken appropriate action, with our allies, and we will continue to take the necessary steps to ensure our collective security. Russia has only sought to obfuscate through desperate fabrication.”


The state media broadcaster BBC acknowledged its sole source was the “investigative website”, and provided internet readers with a direct link to the Bellingcat story. The BBC added more passive reflexive understanding:

“British officials have not commented, but the BBC understands there is no dispute over the identification.”


Russian sources say that for Peskov to mention Bellingcat was a mistake. “Bellingcat isn’t an individual journalist, nor is it an investigative publication”, according to one of the sources. “It’s an information warfare unit paid by NATO to leak intelligence from MI6, CIA and other agencies in the form of narratives constructed to look authentic, though no state official will claim them to be true. Hasn’t Peskov understood by now this is propaganda war?”

The first British analysis of the photo identification by Craig Murray used facial recognition software to test the Bellingcat photographs; he reported a probability of less than 3% for the identification match. From Moscow press reports Murray concluded:

“Chepiga definitely exists… the identification of ‘Boshirov’ with ‘Colonel Chepiga’ is a nonsense.”


Murray also reported that the accumulating evidence from Russian press investigation is “that Russia is not telling the truth about ‘Boshirov’ and ‘Petrov’. If those were real identities, they would have been substantiated in depth by now.”

Max van der Werff, the independent Dutch investigator of the Malaysian Airlines MH17 case, has spent years in detailed examination of similar Bellingcat allegations based on social media, video clips, photographs and identity matches, in order to accuse named Russian soldiers of shooting down the aircraft in July 2014. For details of van der Werff’s work on that case, start here and here. 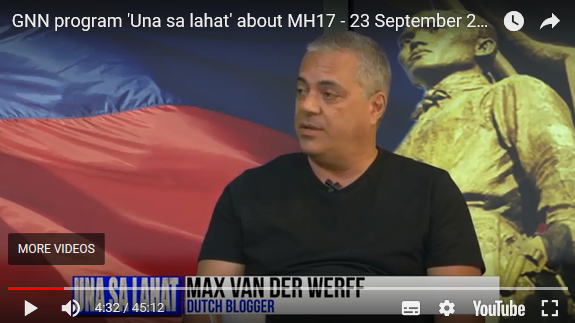 Max van der Werff on Philippines television this week discussing the
evidence of the MH17. Three Filipinos were killed on board the aircraft.

Bellingcat produces “not so many fakeries,” van der Werff commented on the Chepiga claims.

“Bellingcat works more cleverly than that. It extrapolates ‘facts’ based on data which do not support the conclusions at all. In essence, the Bellingcat method goes like this: Bellingcat gathers lots of information from ‘open sources’.

“Bellingcat claims it has verified those sources, but we cannot independently verify them. Bcat publishes a narrative based on osint [open-source intelligence] which it claims is trustworthy. If parts of this narrative are debunked, Bcat never admits it produced a false narrative. Instead, the narrative is altered slightly.

“The entire corrupt western media copy/paste Bcat stuff. Conspiracy thinkers think they need to prove Bcat’s narrative is false. These thinkers get stuck, however, because they don’t have the underlying data which Bcat uses. This is the mechanism which happens over and over again. I can dissect this trademark method for once and for all — without the illusion it really would make a difference.”