Reviewing Resistencia: The Fight for the Aguan Valley

Reviewing Resistencia: The Fight for the Aguan Valley - A Documentary Film by Jesse Freeston 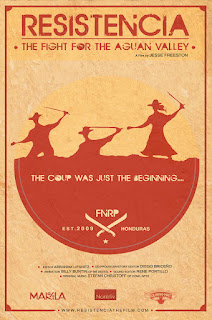 Translating in English as resistance, "resistencia" too means "endurance." And, it's the grinding, relentless injustice and violence meted out against the people of Honduras' Aguan Valley that rivets ones attention to Jesse Freeston's slickly made, full-length chronicle of a people fighting for more than mere physical survival, but struggling to maintain a dignified existence.

Here, the peasants took the land back from the barons, and have worked cooperatively since the military coup in 2009 to make for themselves and their families a life connected to the earth.

Here, the children of the campesinos can hope for a future of healthcare, education, housing, clean water, and most importantly, that dignified life; if they can endure.


The Unified Campesino Movement of the Aguan, (MUCA) slogan above reiterates a refrain familiar to any who have studied the region's colonial history. It's a modern retelling of that very old story in Latin America: Oligarchs, in the service of kings, queens, and Gringo corporations, push the campesino off the land, quelling protest with a brutality rightfully earning infamy.

During the dark days of Reagan it was John Negroponte and the CIA running from Tegucigalpa the death squads that terrorized a continent. The Dirty War continues today in the Aguan we discover, with an average of two campesinos per week being abducted by the men with guns, their tortured, bullet-ridden corpses dumped to be found later by comrades in the farm Co-op's irrigation ditches, and at the jungle's edge.

Impunity is the poison at the heart of Resistencia's tale of a hijacked Honduras, where no police investigations, let alone arrests of perpetrators in the scores of political murders the people of the Aguan have suffered ever occur. In fact, the federal police are active in destroying the homes, schools, churches, and infrastructure the cooperatives have built over the six years since the coup that ended, and began, everything.

Images of bulldozed villages, reminiscent of the aftermath of Israeli visits to West Bank and Gazan farms and olive groves illustrate just how much Resistencia costs. And, it's a cost borne not by the campesinos alone. Freeston's film includes the story of journalist Nahún Palacios, gunned down by assailants as yet "unknown."

Shot over a period of four years and multiple visits, there is a subliminal tension in Resistencia. It's as though a clock were running, its seconds ticking louder; a countdown to a showdown Hondurans seem destined to make.

In the Blue corner, a detached, corrupted elite, beholden to their Miami bank accounts, and the diktats of foreign capital; and in the Red, the disenchanted campesinos still on the land, and the growing ranks of their compadres driven from it and into the barrios.

Freeston was on-hand too to record the now weekly demonstrations against government corruption that brings tens of thousands of torch-bearing protesters into the capital's streets.


What's next for Honduras is left a hanging question. It's a question being asked in other countries of Central and South America, where hegemonic interests are focused on reversing the leftward drift of countries like Ecuador, Venezuela, Brazil, Bolivia, and Nicaragua.

But for now, Resistencia: The Fight for the Aguan Valley is a resounding shout out to the campesino in all of us to bring our attention back to the fields and the people of the land, those 'Salt of the Earth' as one noted peasant once called them. And it reminds, in the words of a more contemporary observor,